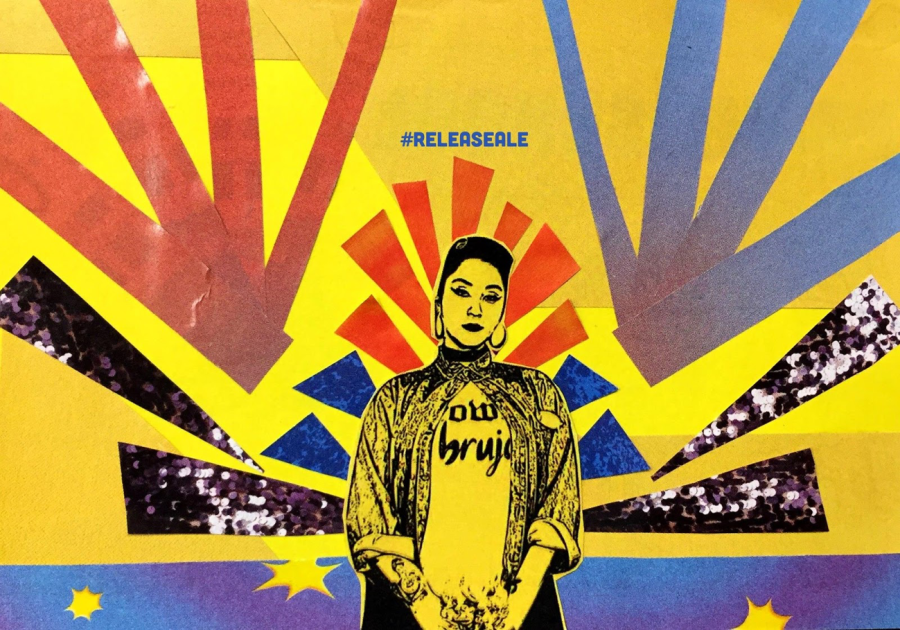 “Does history die if you intentionally repeat it?”

Looking into the camera, activist and community organizer, Alejandra

Pablos says :   “If you are seeing this I just got detained by ICE.”  The temporal logics

detained    I am transported, through the moment of  witness,

back to the moment of Pablos’ capture    :    “If you are seeing this,” she coordinates for me, “I just got detained by ICE.” The moment of witness, of watching rebounds Alejandra Pablos into an i-just-got-detained infinitum, a feedback loop of capture. Troubling conventional grammars of time predicated by an allegedly standard English, Pablos underscores the mechanics of on-

going suspension that run the gears of immigration policy in the US;    the present moment is punctuated by the continual action of detention. To see this is to be witness to another moment of capture, to be woven into its violent temporal logics of over-seeing. You are seeing me, but I am not here.

The occasion for Alejandra Pablos’ video, recorded on March 7th of this year, is/was her detention by Immigration and Customs Enforcement at the deadly Eloy Detention Center in Southern Arizona. Following a regularly scheduled check-in with ICE as part of her probationary status, Pablos is/was unexpectedly taken into custody.  As of the writing of this essay, she has had

As of the writing of this essay,

Pablos’ call to see [“If you are seeing this…”] the organizing logics of time, witness, and intersecting histories is also elaborated in Amanda Russhell

footage of Bree Newsome’s removal of  the Confederate flag, images of Dylan Roof, Jesse Washington’s lynching and the face of a spectator witnessing that violence. Pablos’ utterance and the images in Field | House are intent on punctuating invisibilized continuities and cyclicalities of violence. Field | House hinges on concepts of saturation; dissolving color gradients and translucent imagery activate a temporal depth of field evoked in the movement

of the  |  featured in the pieces’ title. The eye is doused. Photographs, footage and text rise and fade to and from the foreground at various speeds and rotations to create a flow of visual spectra. These are not vanishing acts, as nothing disappears /// The eye is doused. Saturation also operates on the level of spectatorship: how much are you willing to witness or, better, (for) how long are you willing to witness, to be doused. “Passivity level” as Wallace notes, or historical saturation, in Field | House is a question of  how much and  for  how long… 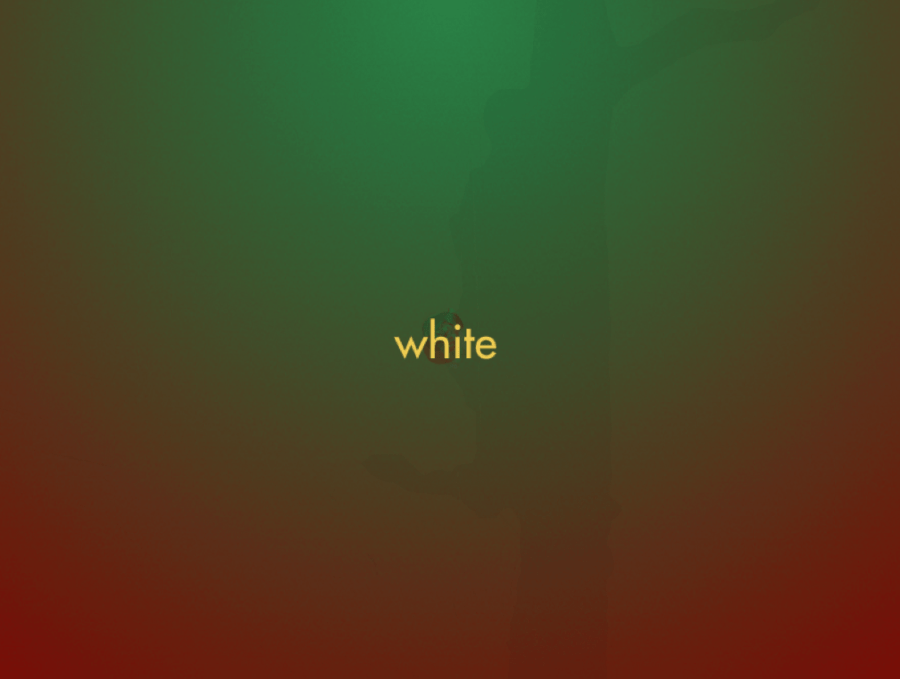 Field | House is unavailable to me ( ? ) This is neither collage, nor suture, nor layer nor projection —

each of these modalities tends to highlight a distinction and separation between the constituent materials. The process of collaging calls attention to its various fragments as it does to the newly composed whole. In this mode of relation, comprehension lies at, between and through the edge|the edge inaugurates perception. Wallace appears to propose an altogether different relationality, one that refuses gap, edge, or respite between the work’s visual imagery. The edge is troubled, saturated. The edge is doused. Degrees of familiarity and proximity are what propel the work’s temporal registers.  In

Field | House, Wallace gives structural meaning to US anti–Black violence by removing  the temporal seams and edges critical to a settler state intent on

invisibilizing its flow of violence: you are seeing  : :  just got detained

If there is a seam in Wallace’s work, it is not between the constituent elements of the works projected through the window panels, but rather between

spectator and a perceived ability to ( re ) organize the temporalities that undergird anti-Black violence. Her work accounts for the continuum between spectators at Jesse Washington’s lynching, Dylan Roof and our continually distracted or interrupted gaze; the gaze that refuses to acknowledge the continuities, the historical stretch of violence. My gaze is both the seam, and the system that labors to re-integrate the seam. My gaze desires the discontinualthejuncturetheedgeofcompreshention. Yet, “[a]ccounting for the collapse of a progressive time-and-space continuum” Field | House disrupts any singular temporal logic. The footage of an ascending Bree Newsome, seemingly embossed upon the screen, launches to another when

“I need you to fight for me,” says Alejandra Pablos, “as I’m fighting inside, you please fight outside, ” invoking what Mishuana Goeman has described as the disruption of a settler grammar of place. Settler grammars, notes Goeman, highlight “colonialism’s dependency on the redefinition of all Native spaces from the body of the individual to large landmasses in order to maintain settler power.”  The management of the detained body — the body scheduled for check-ins, subject to detentions, suspension and removals — exemplifies settler grammar of place. From the stolen Pina and Tohono O’odham lands upon which the Eloy Detention Center is built to the colonial imaginary that fuels the necessity of carceral spaces, Pablos’ detention is aimed at the management of her body and, similarly, her time. Much like the Native is rendered out of time and placeless by a settler grammar, the migrant’s erasure  is built from similar logics that “function to make acquisition of space

achievable”. The illegal migrant moving through and between spaces (appears

to) upsets a settler grammar of time through her mobility. Pablos’ mobility between nations, between US cities, between places of work and places of activism renders her navigation of time too radical, too unruly. After all, the “illegal immigrant,” to remain invisible and uncapturable, must remain frozen and checked by time. After all, the ex-con, to remain invisible and in good standing, must subject herself to monthly check-ins.  Pablos refused this freeze by ripping through seams, by ripping through these time management schemes.

The very language of US immigration policy is punctuated by temporal grammars: Notice to Appear, Detention, Removal, Check-in, Re-Adjustment, Order of Supervision, Permanent Resident, Temporary Protection. The migrant is a function of time to be corrected. I remember, a year out of college and working at an immigration law firm in D.C., being corrected for using the word

“   deported   ”       a word with which I was intimately familiar.  We don’t say deported anymore, the term is Removal. The temporality of deportation, in the

word, deported, is complete, perfect. As in, one is deported; the end. You are

gone; the end .     Removal, on the other hand, can happen forever. As a function of time, “removal” corrects the historic cruelty that “deportation” made

palpable. Removal corrects the land violence clarified by de – portation, as in to remove from a port, to carry away, to wear away, from the verb “porter,” or  “to wear.” Bodies are worn out from the land. The juridical reasoning for the shift from “deportation” to “removal,” under the rubrics of the state, came from an interest in consolidating the scope of deportable bodies. Removal, as it currently stands, applies to the “deportation” of aliens currently in the United States in addition to the “exclusion” of foreign nationals attempting to apply for entry. Removal ensures that aliens whose bodies (over)expose historical violence are worn-out, sufficiently & forever;

Disrupting colonial story|ines, Pablos urges us to re-organize the violent logics of carceral spaces and temporalities: “As I’m fighting inside, you please fight outside.” Casting the temporality of fight into an ever present, you fight

spaces \\\ , between fight .  &   fighting. Akin to Wallace’s gestures in Field | House  — gestures that dissolve the seams between historic(al) acts of anti-Black violence —  Pablos refuses the interruption imposed on her by a settler grammar of time insistent on progress and futurity. Pablos’ statements, like the saturation in Field | House, demands contention with the flow of whatever

“now” appears before us : :  you fight outside. In the tension between verbs, I sense an alternate

nowness. A nowness that…

*         On April 19, 2018, after Alejandra Pablos was finally granted a hearing date, she was released from Eloy on an $8,000 bond raised by her supporters. & her next court date is already set for mid-May……; Moments after her release, surrounded by friends and loved ones in a field swirling with sand

take a break from activism.” She laughs and continues:

Jennif(f)er Tamayo is a formerly undocumented poet, essayist, and performer. JT is the daughter of  Nancy, Flora, Leonor, Erika, Sol, y Ana. She has published several books and chapbook collections, including [Red Missed Aches] (Switchback, 2011), YOU DA ONE (Noemi Books 2017) and most recently, how to kill the future in the present (Green Lantern Press 2018). Currently, JT lives, studies, and organizes on Ohlone and Patwin lands and is pursuing a PhD in Performance Studies at the University of California Berkeley. You can find her writing and art at www.jennifertamayo.com.