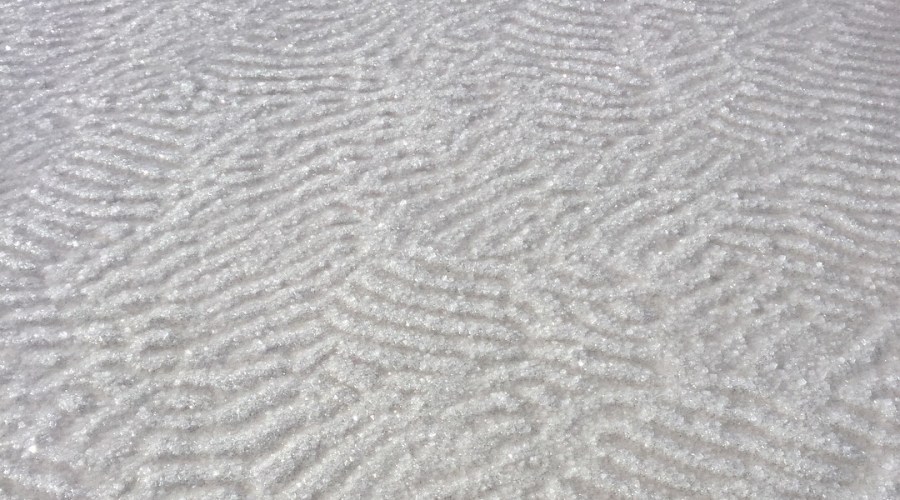 Last fall, I went to see Robert Smithson’s Spiral Jetty, built at the northeastern edge of the Great Salt Lake in Utah in 1970.

I had been invited to speak at Utah State University, and my host, Marissa Vigneault, gamely offered to take me and my teenage daughter to see the site, despite it being an hour and a half drive from Logan.

The offer was, I’ll admit, the deciding factor in my decision to accept the invitation. Like a lot of art historians weaned on the 1990s fascination with entropy and other processes that we imagined to be “abject,” Spiral Jetty loomed large in my imagination. It was not just an earthwork, a construction or deconstruction of the landscape on a massive scale—it was in some sense a reenactment of the impossibly-slow-to-conceive developments that shaped the earth, sped up so we could now see them in a human-scaled notion of time. This required a kind of reversal—imagining the creation of the earth, of landscape and geography, as an additive process, a matter of building up, of accretion, now translated as dump trucks and loads of gravel and mud. But the creation of the earth, we know, has not been an additive process as much as a slow decomposition, a shifting that turns stone to dust, where the rise of mountains is a deceptively entropic phenomenon.

Watching Smithson’s film about the making of the work, with its intercuts of mechanical earth-moving equipment and images of dinosaurs filmed at the American Museum of Natural History, only reinforced my sense that I was witnessing a deliberate translation of time scales. His work, as with Partially Buried Woodshed (1970), for example, imagines time as a material process, visible through accretion and decomposition, and was recorded via strange reversals and recursions, when material pushed up from deeply buried states or fossils emerged almost in defiance of our notions of organic decay or temporal progression. This geological metaphor seeped into the process of making the film, too, in Smithson’s mind:

The movie began as a set of disconnections, a bramble of stabilized fragments taken from things obscure and fluid, ingredients trapped in a succession of frames, a stream of viscosities both still and moving. And the movie editor, bending over such a chaos of “takes” resembles a paleontologist sorting out glimpses of a world not yet together, a land that has yet to come to completion, a span of time unfinished, a spaceless limbo on some spiral reels. Film strips hung from the cutter’s rack, bits and pieces of Utah, out-takes overexposed and underexposed, masses of impenetrable material. The sun, the spiral, the salt buried in lengths of footage. Everything about movies and moviemaking is archaic and crude. One is transported by this Archeozoic medium into the earliest known geological eras. The movieola becomes a “time machine” that transforms trucks into dinosaurs. The drive from Logan took place on an impossibly sunny day, and allowed us a full sense of the strangeness of the Utah landscape. I grew up in Alberta, with massive, open skies and an often disorienting, empty prairie landscape that verged on desert-like in parts, but this was, it seemed to me, even stranger—a moonscape, so alien were the rock outcroppings and hoodoos, with maze-like marshes that punctuated the dry, scrubby ground. This is not to say it wasn’t beautiful—in fact, quite the opposite—but it is a beauty that leans towards the terrifying face of the sublime. We drove on highways, then small side roads, and then, after an attempt or two to find the right turn, a dirt track. I filmed the last stretch of the drive on my phone; it’s a queasy experience watching the camera jerk with every rut and rock.

I’ve avoided the word desolate in this description, although that was certainly one that sprang to mind initially—but this land is not empty. It is, on the contrary, replete—with the fossil record of its past oceanic state, with dun-colored wildlife mostly invisible to my eye, with the tracks and traces of the Shoshone and Ute peoples who passed over and through this land both in the distant and very recent pasts, shaping it almost imperceptibly to outsiders. Smithson’s attention to this landscape, like my attention as I surveyed it, revealed the potential danger of thinking in terms of deep time, geological time, evolutionary time—namely, the risk of forgetting the now, the way landscape is always contested, fraught, necessary to sustain the now. There are other times to consider, including the time of human destruction, of environmental devastation, of colonial violence. The desolation of the landscape that I first perceived was merely my inability to understand its language, not being able to see its history and its present fullness inscribed in myriad ways on its surface. It was a desolation produced by looking through only one historical accounting of temporality.

I gasped when Spiral Jetty first came into view—no less than when I first saw the Sistine Ceiling or Stonehenge, so epic was its place in my imagination. The water level of the Great Salt Lake is at a historic low because of what many term a drought—but is really a matter of overuse, as communities drain off feeder streams before they have a chance to replenish this landlocked sea. (It is an oddity of our language that we mistake the two very different processes by applying that catchall word, drought.) This meant the jetty seemed less an elemental pier than a ceremonial mound, though still distinct from its surround due to its deliberate nature, the incursion of its geometry into a seemingly haphazard surround.

But after a few minutes marveling from above at the way its shape shifted radically depending on your point of view, the way it tunneled scale, contracting and expanding as you walked along its curving path, upending your sense of distant and proximate as you looked over to your companions, my eyes were drawn elsewhere. The lowered water level revealed around Spiral Jetty a world like I had never seen—a world preserved in salt, which crystallized and clumped in an endless variety of ways, sometimes in sharp and delicate shards like a thin coating of ice, other times in grainy pellets like an accumulation of late winter snow. My feet crunched as I walked across the salt-encrusted sand, which had been molded into ripples like a moiré evening gown at some points, glittering as the harsh sun glinted over it. The water in the distance—hundreds of feet out from the lake’s edge—glowed pink and purple from the anaerobic microorganisms that lived there. My daughter ran out to the water’s edge. She has been obsessed with water since she was an infant, and her gamboling gait across this salty expanse reminded me of her childish play. I got anxious seeing her run so far, not realizing it was merely a trick of perspective that made her seem so distant. That’s what perspective does, really—at once locates us in a comforting self-centeredness in relation to the world, and telescopes space so we feel the loss of the far away.

We spent our time finding grasshoppers and bird carcasses that had been pickled, in essence, by the saltiness of the lake; they resisted entirely the expected narrative of decomposition and decay, turned instead into delicate, crystal-encrusted objects that defied time. Once we knew to look for them, we found them everywhere. So fascinated were we that even the fact that most of the bird artifacts were parts ripped from the whole (due to a brittleness conferred from the brining process), we were not deterred. We had moved beyond squeamishness. Bird heads, bird wings, bird feet torn from denuded carcasses were transformed into sequined bibelots, like fossilized treasures, their all-too-weak flesh replaced by something mineral. Unlike fossils, they would still disappear, these corpses—but via erosion, not decomposition. Or, if the water came back, they would perhaps melt.

Walking back to the car, parked on the bluff overlooking the Smithson earthwork, we were struck by how different was our view now of Spiral Jetty. It wasn’t a pier anymore, or a burial mound, but rather something like a directional marker; with no water surrounding it, it stopped being a thing to look at but an arrow, pointing us back in time—or rather around in time—revealing a landscape that conjured an impossibly distant past through a kind of organic metaphor, where salt stood in for silt, freezing the world in human terms.

Aruna D’Souza writes about contemporary art, intersectional feminism and other forms of politics, and institutions and the way they shape our world. Her most recent book, Whitewalling: Art, Race & Politics in 3 Acts, was published by Badlands Unlimited in May 2018. arunadsouza.com