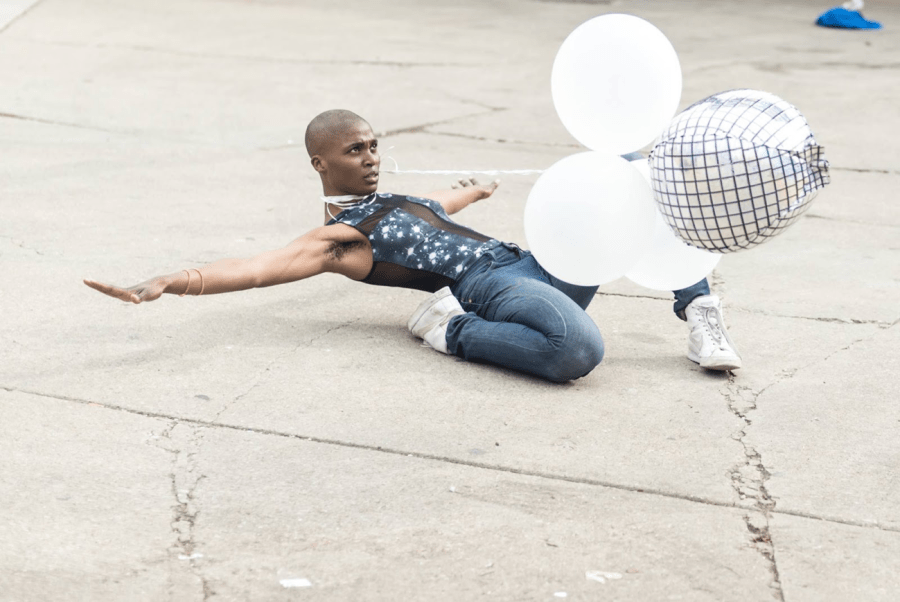 “The dance, however, is not an escape. It is a punctuation. It is about claiming an instant of me and something that can be mine completely.”

With caution and sharp delay, NIC Kay descends the steps of Judson Memorial Church. Almost as if to ask the space permission. Almost as if to check the temperature of a body of water. Like searching the house for ghosts. With wobble, but without fault, a firm planting that is careful and controlled. Rise, Lazarus. Kay comes down to us with pulsing and fortitude, a bouquet of balloons around their neck: a cubed reflective-silver balloon and five — which, in the throes of crouchstep and gentle collapse bursts as though exhausted, becoming four — cloudied-white balloons cast a heavy essence. Derobe a rolling ocean, shedding blue to reveal the cluster star with rotating grace. NIC Kay is made heavy and light with helium and archival guidance, entering/encountering the space, carried by persisting weights. 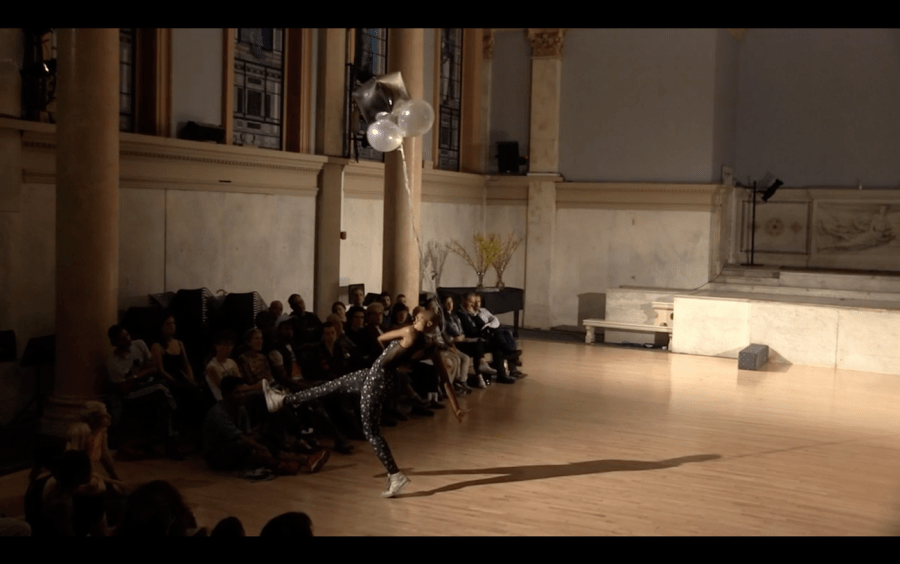 Recently, I was able to visit NIC Kay in their studio at Pioneer Works, where they are currently in residence. The performance artist, who hails from the Bronx, spoke to me about their performance of pushit!! and their practice, emphasizing the importance of sharing space and learning with others, “being together in a complex way.” I am reminded of a day of Black exclusive conversation and workshops organized by Thick/er Black Lines I attended last summer: in the company of fierce thinkers in varied disciplines—Black folks who are academics, artists, activists, but also just living, working folks (there were even children! it almost felt like Bible study) looking to talk and learn about Afro-pessimism in an accessible and anti-hierarchical space. Frank Wilderson tells the gathered that “the point of Afro-pessimism is to make Black people feel worthy of their pain.” I think about this individually and collectively: even before we try to seek justice in a system invented to deny us, before we muster the strength to resist (our day-to-day micro-rebellions in public places, but also the in the spaces we invent to lick one another’s wounds), we must pause to recognize that we are hurting. As a Black person, as Black people, what does it mean to look critically at y/our positioning in the immediate and extended world, the effects of the disease that is antiblackness, without being defeatist (and, recognizing the flaws of victory and its inherent impossibilities), and truly believe, comprehend, and embody the understanding that it is not our fault things are this way? To acknowledge we are not the inadequacy?

A slim hope, but it blankets: not having to turn every moment of fleeting joy or comeuppance as a grand tale of how I got over. Some of us never do. The cyclical violence of the antiblack world ensures most of us never will. To locating the source of ailment and violence outside of ourselves: instead we see how and by whom it is preserved; we discover, quoting Jared Sexton, “the attacker’s weakness, rather than displaying the defender’s strength.” Alongside the attacker there are the wellwishers: as we literally and metaphysically bear and tend to our ailment and pain, the wellwishers present the always empty encouragement to get well, a performative of niceties. Wellwishers alienate the afflicted, skirting accountability with false support and without taking responsibility for their hand in upholding the contexts of systemic injustice. In pushit!!, an extension of their project “Get Well Soon!,” NIC Kay provides a space to challenge and critique both attackers and wellwishers, but the performance does not aim to center them. Instead, pushit!! offers a collective ritual of healing, an inventive remedy, a slow exorcism. With slipstep and stomp, Kay addresses the space in all its crevices and centralities. They slink about, assertive in their unruly temporalities, anchored and buoyant all at once.

“White people were not able to comment,” NIC Kay tells me about the performance and its immediate reception. I catch myself laughing and nodding emphatically in the a-ha!, in the humor of white bewilderment: do white people (even when claiming expertise, as they so often tend to) ever get it? Don’t answer because the answer is unimportant to me, boring even. Where my interest lies: as we are under endless surveillance for purposes of policing and thievery, how do we obfuscate and protect our work as Black artists in public while maintaining an open line to each other and our communities? In prompting this query, NIC Kay’s work exemplifies the practice of Black Secrecy/Black Noise I find myself meditating. And, when I say Black I mean everything and the destruction of time. Noise allows Secrecy allows Noise, exercising what Saidiya Hartman describes as, “narrative restraint, the refusal to fill in the gaps and provide closure.” Grating feedback, temporal ruptures, and the necessary static (occasionally stasis, and considering Christina Sharpe’s activation of still/stillness and its modalities; the gradients of in place and ongoing—that camouflages from the uninvited; ever-evolving and wholly embodied languages adapting our conditions and technology to communicate together, for love and survival. Like Vine. Like Vodou. Like Voodoo. Instead of commentary, NIC Kay suggests silence. “Sit with your non-understanding, what you did or did not see, or have the capacity to hold,” they instruct. 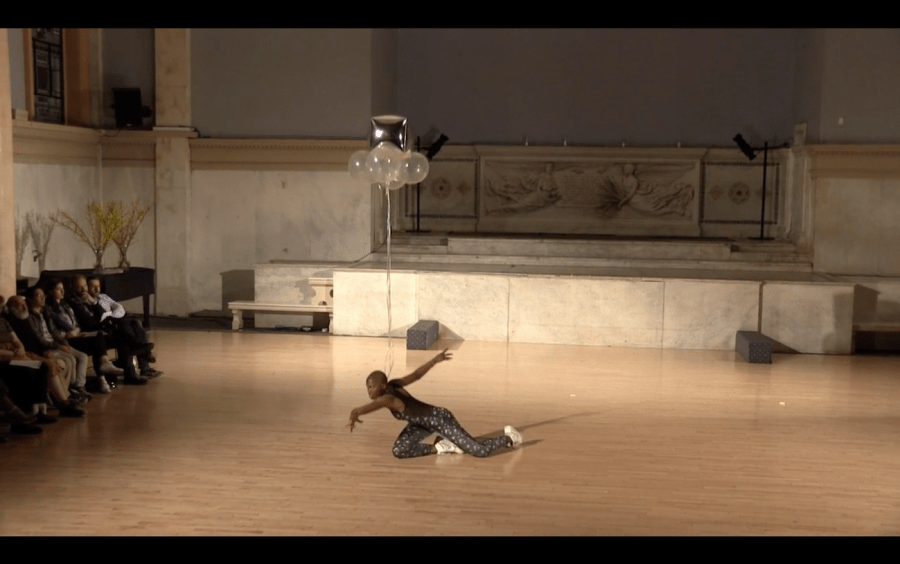 rage to an age / out side of time / where the sage live s / the seer who see s / & does not / say it is / the age, M. NourbeSe Philip tells us in the haunted gospel, Zong! If pushit!! is as much a wake (here, of its many utterances clarified by Sharpe in In the Wake, I summon “a region of disturbed flow”) as it is a celebration, the ! shared by Philip and Kay is the rage outside, the aftermath and repetition of violence done unto, the struggle to make hope through collected energy, through song. Black Secrecy/Black Noise sees the linear project and distorts it, prays for its destruction. Finds both the rhythm and the asymmetry and loops, or as Harmony Holiday tweets “we can improvise rebellions incrementally, in the cut, in the break, in the interior of anything we are trying to mend or undo.” It is mourning hum and it is footwerk. It is work song, it is the ballroom commentator’s roaring chant, sh-sh-sha-show me. I am brought to MHYSA’s “Special Need,” their vocals folding under varying pitch, screeching reverb dispersing clarities but come with me is always clear, a gaseous invitation to the project of secrecy and protection. I am brought to RAFiA’s illegible portraits, queer seraphim limb multiplicity. Disrupting body and presence to articulate ways of being/nonbeing/unbeing.  I consider Derica Shields’ A Heavy Nonpresence; we are made to disappear under the tumidity of the empire. I am brought to Jasmine Gibson pronouncing: You like the noise of me /How I sit in the lining of where / fat meets connective tissue with skin / That’s where I lie inside you. In great company, NIC Kay activates the noise with body, movement, and environment, beckoning to the beyond.

During NIC Kay’s performance, we are caught in the sonic landscape of the song “pushit” (for which the performance is named) by Knxwledge. The looped track envelops the church. The song samples, softens, and slows the O.T. Genasis track of the same title as lip-synced in an Instagram video gone viral of a young boy named Major. In the video, he raps to the camera with effortless cool and the unguarded confidence that is uniquely youthful—a joy briefly returned to us in moments of excitement, when my damn song is on and nothing else matters—and then goes elsewhere, eyes squinted and feeling the music. At one moment, he breaks character and smirks at his mother who, filming his performance, laughs playfully with him. “Ooh, ah, ah, get it,” she encourages, an affirmation of Major’s presence, pleasure, and swagger.

When watching this Instagram video, I am transported to the Friday evenings of my childhood: my two older sisters and my baby sister, waddling about learning her feet, would come home from school and work, move the couch and coffee table, crank the stereo, and we would dance and shake and scream in encouragement of our lucidities until we were breathless or until takeout arrived. Amber light—first UV, then the streetglow—cut through the window and bless the old soundsystem, blasting the radio mix of dancehall, Miami bass, house, and hip-hop fueling us for hours as we caught our sweat blessing. I can hear these memories when I look at the aftermath in disposable camera prints: Keisha and Kerry-Ann posed together hands-on-knees and serving attitude, Brandy, baby powdered neck, one hand on the soft pink wall, one on hip, scowling as she still does with the authority? wariness? of a being that has passed through this world many times. These memories make joy—or something like it, maybe Arthur Jafa’s offering of Black Pleasure in his essay “69”—feel possible because it is possible. We’ve lived it, and we are affirming and encouraging it for others.

Although performing alone, NIC Kay moves with the vigor of many and the might of mountains. While comprehending their own relationship to social architecture, they channel the ferocities of all those they are in communication with, all those they are fighting for, again emphasizing their desire to be together in a complex, intimate way. Kay’s movement activates conversations had and yet to be had, challenging and engaging new ways to critique, to love, and to heal genuinely. In pushit!!!, NIC Kay wars on our behalf, communes with the stars and translates their fire, stirs memories of ritual conclave, practicing an interconnected engagement in secrecy and noise. And as they ascend, caught up in that mystic place, they invite us to levitate, too.

Sean D. Henry-Smith is an image/text based artist working primarily in poetry and photography. Sean’s words and images have appeared in Apogee Journal, Tagvverk, Mask Magazine, The New York Times, and elsewhere.