What if we got free?

What if we could walk around, holding our heads high, unafraid? 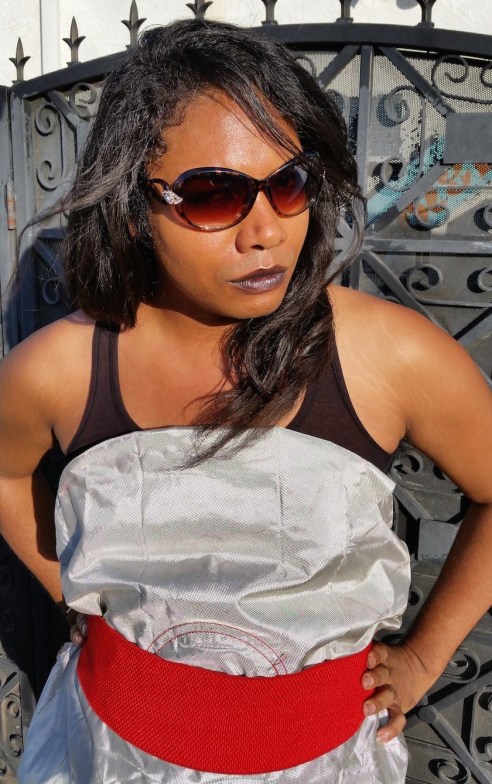 I’m sure many of us, trans women of color, do despite being the number one target of murder among LGBTQ people in the US. Despite the fact that many of our murders go unseen, with no investigation and no trial. The one year anniversary of Freddie Gray’s murder by Baltimore police recently passed on April 12th, and the six police officers involved in his murder are still on trial. Though I search throughout the web and in newspapers, I can find no mention of any investigation into the NSA agents who killed Mya Hall for mistakenly driving her car towards the NSA building in Baltimore. The murder of trans women of color continues to be less of a priority to our movements. Where are the demands for justice for Mya Hall? Why do we continue to allow black trans women to be murdered with impunity? These questions weigh on my body as I leave my home daily.

When I came out to one of my closest family members as a trans woman, early in my transition, he told me that he had witnessed some of my more removed family members beat up a trans woman in Bogotá, Colombia, while he did  nothing. I wondered if he was telling the truth, or if he had participated, and this was a rewriting.

Unstoppable is a dream, a dream of a future in which trans women of color can feel safe from guns and knives. By wearing high tech materials recycled from the junk of a high tech culture, using scraps like Kevlar from junkyards, we could stop bullets. We could keep ourselves alive through the brilliance of trans of color poetics.

In the public conversation at the Unstoppable opening, Kiyomi Fujikawa spoke of the amazing organizing work being done in Seattle to build health and safety, through community models of safety, by the Bayan Queer Collective. She spoke of transformative justice work being done to reduce people’s reliance on police.

Nikkita Oliver said that Unstoppable makes her sad. It’s sad, she says, that we should have to know how many layers of tire it takes to stop a 9mm bullet. Just as it’s sad, she said, that youth of color feel that carrying a gun will keep themselves safe. 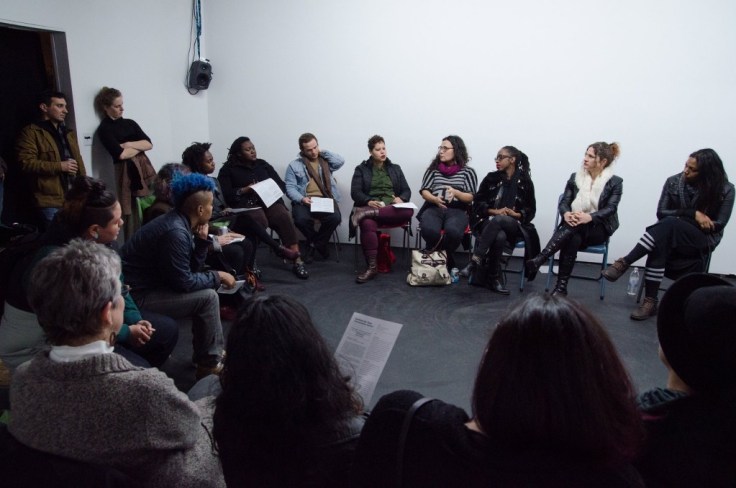 Unstoppable was inspired largely by two black women. Reina Gossett said at the INCITE conference in 2015 in Chicago that Sylvia Rivera always said that trans women should keep a brick in their purses. She spoke of the Street Transvestite Action Revolutionaries (STAR) house being a form of direct action that provided safety by providing housing for trans women. Wearing Kevlar is like carrying a brick in your purse, but it is wearable defense instead of offense.

In the summer of 2015 co-founder of Black Lives Matter Patrisse Cullors said that she was inspired by Local Autonomy Networks to think “what would technology for black lives be?” This question, in addition to her Bulletproof line of clothing, designed with Damon Turner and Foremost, led me to begin research into DIY bulletproofing methods, to protect black people, black trans women, and people of color around the globe who are subject to gun violence on a daily basis, such as people in Latin America or migrant people who are regularly shot in the back by the border patrol.

For the exhibition, the front room displayed the evidence of our Science of the Oppressed experiments. Tires and Kevlar with bullet holes in them, hung up and well-lit for close examination. The bullet that the tires stopped, in a glass bell jar. A book that was part of the target, The Wonderland of Knowledge, full of bullet holes, an apt symbol for our time, in which, as Achille Mbembe describes, reason is no longer the truth of the subject, but in its place the crude realities of life and death are. Mbembe claims that one thing necessary to decenter whiteness is a new aesthetics, and I see Unstoppable, a gesture of trans of color poetics, as part of that project.

The second room of the Unstoppable exhibition contained the materials testing video, showing Edxie Betts wearing the bulletproof dress and backpack prototypes, Chris Head, and myself in a short red dress, firing a 9mm gun and a 5.56 rifle at materials we had read were bulletproof. We found that used tires could stop a 9mm bullet, the same bullet used to murder Trayvon Martin. Unfortunately, in our test, it took approximately eight layers of tire, which is too heavy for a dress, but not for a backpack. The Kevlar we recovered from deployed airbags could not stop any bullets.

In speaking about the project to people, I find it hard to avoid the word “saving.” The phrase “technology for black lives” is a genius phrase of poetry from Patrisse Cullors which uses grammar to remove the savior dynamic from the equation, and replace it with one of the fulfillment of life. Often when explaining Unstoppable in conversation with people, I find that the phrase “saving black trans women’s lives” comes into the conversation, and gives me pause. The project is an intentional gesture meant to demonstrate my belief in the importance of solidarity when it seems to me that people are retreating deeper into entrenched bunkers of rigid identity categories. Yet I also worry about my own underlying motivations, stemming from my own childhood trauma, that drive me to want to seem like a savior and be told that I am a hero. These concerns and critiques of the project are ongoing for me.

Research into Unstoppable continues in my new lab, the Poetic Operations Collaborative (POC). My research assistants Josefina Garcia-Turner and Kate Sohng are locating Kevlar, researching how to create garments out of it, and surveying existing research into bulletproof materials. The exhibition at INCA was a first iteration of Unstoppable, and future exhibitions will include new materials testing videos and new designs for garments. 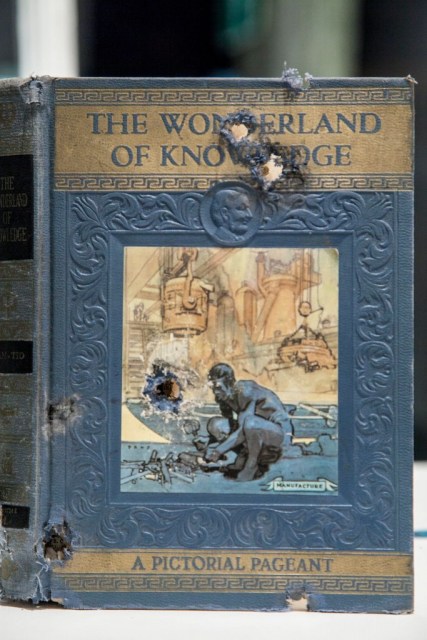 What if we could get free? What if we could live lives free of the constant fear of murder? Perhaps my largest concern that I carry forward in Unstoppable is that it may be the wrong focus. In a two hour conversation that attempted to bring forth real community solutions at INCA, no clear direction was agreed on. While the event was encouraging, seeing many different communities come together in the small gallery space to work to end violence, it was only the tiniest beginning of building a larger conversation in Seattle. Moving forward, I recall the interview that Edxie and I did with Citizens of Culture, where Christy Roberts asked what we would do if we had an infinite budget, instead of the zero-cost approach that Unstoppable takes. Our answer was to focus on healing and wellness. After so many years of fear, hurt, betrayal, and neglect, even from our own communities, there is so much healing to be done. I continue to believe that if trans women can work for wellness and strength, they can be safer, and that is pointing to new directions for my work.

It seems that for now, maybe the most important function of Unstoppable is to make perceptible to audiences the kind of urgency that many trans women and black people feel on a daily basis. Making bulletproof clothing accessible invites a conversation about the very real experience that I have had of leaving my house everyday and not knowing if I’ll make it home that night. Yet for me, Unstoppable is still a dream of a life of safety, health and joy. I see it in the tilt of Edxie’s head, her chin up, her gaze raised to the Los Angeles sky, freeing herself, now. 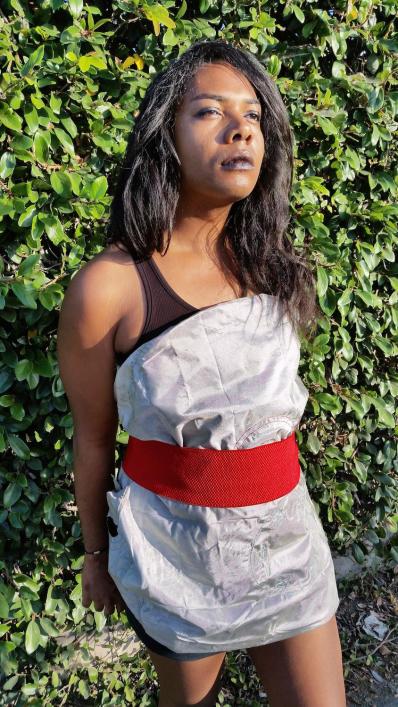