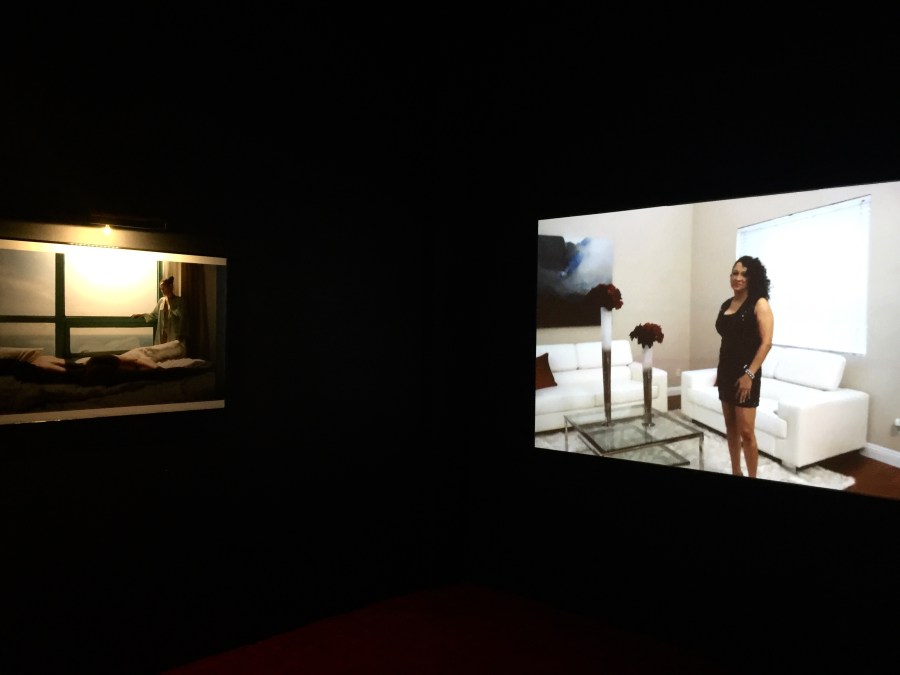 still from "Reality is Not Good Enough"

It’s often difficult for me to watch films in art spaces. Whenever I come across a film screening at a museum space or a gallery, I become an official member of camp-narrative, or camp-movie-theater. I want nice chairs, I want popcorn, I want to fall asleep on someone’s shoulders (yes yes, the critique of entertainment, pleasure, etc). I don’t want to stand stiffly next to someone and strain to hear. The art space often feels like an unstocked refrigerator. It’s cold. Literally, it’s so cold. There’s so much silence and white space and where’s the laughter? How am I supposed to watch something, here?

In fortified art spaces, I’m rarely able to finish watching a film, let alone watch it twice, and return to watch it again. I didn’t know this was possible. However, I saw Rashayla Marie Brown’s short film “Reality is Not Good Enough” twice at the opening of her show at Aspect Ratio, and returned to watch it twice more. And there’s good reasons for this. 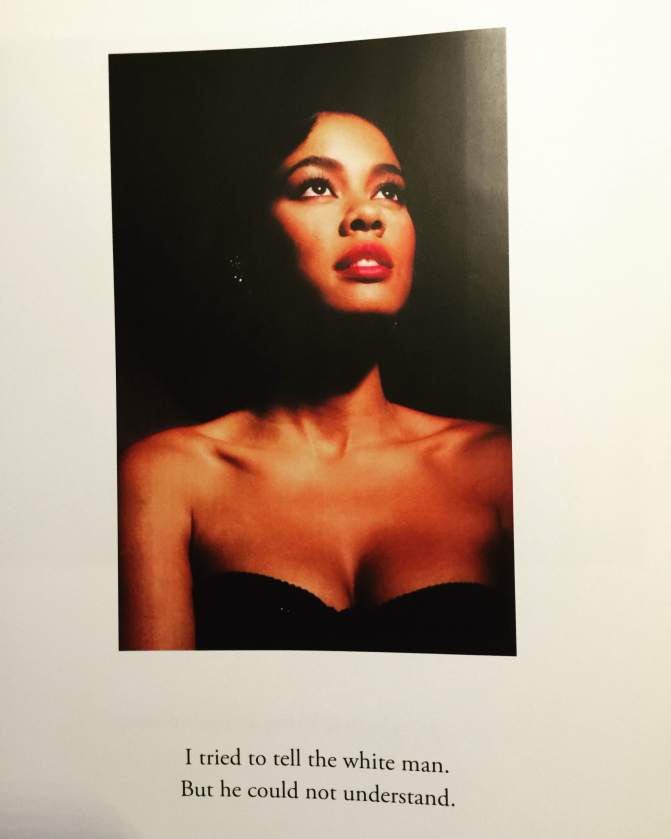 a page from “Red”

The milieu of Brown’s screening of “Reality is Not Good Enough” was private-theater-extraordinaire. Potential audiences would remove their shoes, step on softened red carpet and into foam chairs.  The space included a portrait of the artist, a glass table with the artist book “Red” on top,  white gloves, a small lamp and a photograph of Carrie Mae Weems. The environment seemed highly formal and at the same time intimate. For me, the film viewing experience was magnified by these factors.

Other than the environment the film could be viewed in, to situate a screening and a viewing of sorts—the film is fucking brilliant and dynamically urgent. The opening situates Brown stating that she wants to “learn how to make a television show” and the politics and ethics of this knowledge production. One of the first monologues of the film is a conversation between Brown and a family member on the phone, where she discusses the material dynamics of the filmic gaze. Brown articulates that though Shonda Rhimes is the creator of television shows, what does it matters if the cinematographers and the camera people on set are not interested in filming Black women with care? Brown cites that 96% of cinematographers are men (90% white men) and delves into a conversation about the the contradictory imaging that cinematographers not invested in Black women yet filming Black characters, might bring.

The dialogs lays out a complicated and essential conversation about the gaze that is rarely, rarely taken up in early feminist film theory to contemporary discussions. From bell hooks to Laura Mulvey to everyone—everyone—has been involved in conversations concerning the gaze and the politics of representation. The gaze is an abstract, ever moving, flooding, flowing dynamic. And at the same time Brown points to how the gaze is material. It’s the camera. It’s the person looking into the camera. And who looks into the camera. With whose idea is the camera looked?

Concerning the possibilities of representation, Gayatri Chakravorty Spivak has responded to critiques that the subaltern can speak by stating, “Thank God, the subaltern is not subaltern any more.”

The film ends with an interaction between Brown and her niece. In the scene they are in an empty apartment and Brown prods her niece to look into the camera, and to tell her what she sees. Her niece responds that part of Brown’s body is cut by the frame and with this remark, the frame is adjusted to hold more of Brown’s body. The frames cut, and remade. The film opens with a discussion about the cameras, the gaze, the cinematographers that could capture Black women with care, and closes with the niece appearing into the technology to frame Brown’s body more fully. A reconstruction, a construction: the care.

I asked Brown how I might refer to the “characters” in “Reality is Not Good Enough” and she responded that she would not use the word “character.” That she wants to interrogate the notions surrounding acting and being yourself. Reality is both constructed, managed, damaging and simply, not good enough.

In a separate room next to “Reality is Not Good Enough” was the film “Throughout the Universe” (2016).  In the film the artist/the goddess/the performer/the informer is witnessed in front of a pool and in front of empty living spaces reading from various astrological texts and from a standard reality television contract. I asked Brown about the texts, and she stated she was reading Nakshatras from vedic astrology (superb fact, Brown has been an astrologer since she was 18…!).  And that in nakshatras, there are articulations of “personality types”—which could very much lead the way in conversation regarding: female types, stereotypes, typecasts, and roles. Brown explained that while looking at reality television contracts, she noticed how prevalent the use of the refrain “throughout the universe” was regarding the rights of the filmed images. That “throughout the universe” regarding representation could be standard legal language, as in, the contract allowed the various companies to have and to use your captured image throughout the universe—well what does the universe think? 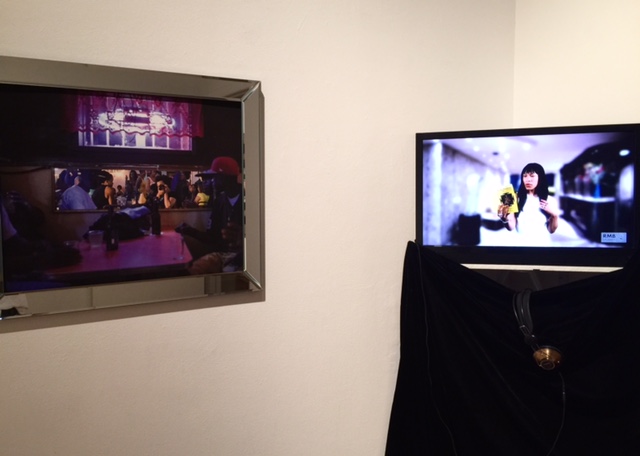 I loved the juxtaposition of the contract and the astrological text, and the visualization of the performer as goddess-type, entertainer-type, assistant-type and more. Hearing the contract next to the Nakshatras heightened their compositions and their stakes. It also amplified the question: How does one ethically learn how to make a television show? How does one make a television show with a crew that could peer into the camera with care—for the Black women and the Black characters—what language, what kind of contract could imagine for the images to remain with the subjects?

Brown’s “Open Letter to My Fellow Young Artists and Scholars Who Work on the Margins” laid out the politics of community, the care we could have for one another. In the letter she writes,

“Community is how artists survive perpetual historical amnesia… We can explore such ideas as the post-black, the post-racial, and the post-feminist because our ancestors’ world was a world of firsts before the post. I appeal to you to acknowledge your influences, publicly and loudly. I implore you to do your research and cite your sources. I ask you to share. Do not be lulled by the open gate or window, and then close it behind you so no one else like you can enter. A sense of competition is bred into the art world that makes you feel like you will lose if you aren’t the chosen one. Especially to the radiant child and the wunderkind, I ask you to open your hands and release your anxiety.”

“Reality is Not Good Enough” and “Throughout the Universe” cultivates the possibilities laid out in Brown’s “Open Letter.”  Brown unfolds the process of care and attention imaginable for the subjects within the frames, where the concerns and the camera become held and shared.  Both film projects also presents the ethical stakes of production: the foundationally violent  language that grounds the current world of image circulation. What is read in “Throughout the Universe” is the standard contract between the subject as the object, the camera and the company, in the universe?

The artist rightfully intervenes with knowledge bestowed by the stars: with a show of her own.

“Reality is Not Good Enough” may have additional episodes or parts. Check Brown’s site for future screening updates.

Lauded as a Breakout Artist in New City and ARC Magazine, artist/scholar Rashayla Marie Brown (RMB) manages a living studio practice across an extensive list of cultural production modes. Exploiting the role of the artist as both an agent and an object of desire, her work spans camera-based image-making; performance and social engagement/disruption; curation and installation; and theoretical writings infused with subjectivity and spirituality. A lifelong nomad who has moved 24 times, her journey as a professional artist began as a radio DJ and poet performing research in London, England and as founder of the family-owned design company, Selah Vibe, Inc., in Atlanta, GA. RMB currently serves as the inaugural Director of Student Affairs for Diversity and Inclusion at the School of the Art Institute of Chicago (SAIC), fostering queer Afrofeminist narratives across institutions.