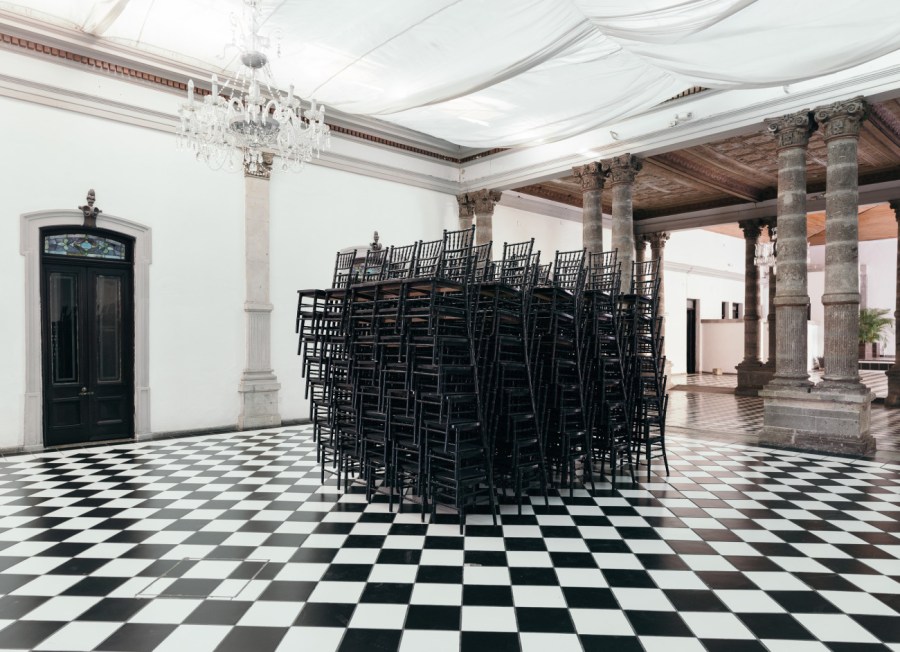 I write this on the seventh anniversary of my immigration to the U.S. To me, being an immigrant, similar to being queer, is about making new relations in the world. From the vantage point of immigration’s disorienting spatiotemporal (dis)placement, nothing’s going to be “the same,” as “sameness” is rendered irrelevant with a constantly wiggling reference point. The relationality of immigration is a fugitive one between two parallel sinusoidal lines moving in very close proximity along each other, yet coming to contact only in individual points. In my years of intense, intimate entanglement with the immigration bureaucracy, as a post MFA in Los Angeles, I was only able to find babysitting jobs due to my cultural “illiteracy.” That was when I experienced this phenomenon in full effect in my not-so-romantic everyday life.

In the U.S. brands are not types of specific food, but the food itself. For instance, Oreos are oreos before they are “a type of chocolate cookie sandwich with a white cream in the middle”. Grammatically, proper nouns are first, nouns, then given a definition for those unfamiliar with them as nouns, the only ones who write and think of them with the first letter capitalized. In my early days of babysitting, breakfast Cheerios in a bowl were weird abstract shapes floating in a minimalist background, Pop Tarts sloppy little ab-ex paintings. Those years were an extension of the long stare exchanged between me and the Starbucks cashier who asked if I wanted “room” with my first coffee in the U.S.

Carmen Argote’s work throws me back to those early years in the U.S. as an immigrant MFA student and the way they shaped and continue to inform my position as an artist. I visit Carmen at her live/work space in Lincoln Heights. She’s working on a new piece, titled “live/work” for an upcoming exhibition at the Denver Art Museum. The piece is in progress a couple of feet away from where we are sitting: a metal divider through which I can see parts of the kitchen and three cats occasionally moving around in the “live” space. The metaphor of home is superfluous in the literature by and about immigrant artists, writers and poets. Carmen uses both “home” and “house” in her work quite literally. The image or architecture of a house is present in most of her work, a building or structure is often the starting point of a process: rubbings of a building’s fences combined with elements of houses that her father drew as an architect are drawn and painted on manta covering the entire facade of a house in LA, the manta drawings of her make-shift room’s interior at Mansión Magnolia recreate the room inside the gallery. Her sister, Alex’s room becomes the “white cube” that she inhabits, responds to and brings into the gallery. The entire walking perimeter of Schindler’s House is traced in redwood lumber at a 1:1 scale, brought to the high desert and laid on the ground for the visitors to camp inside or around its periphery. 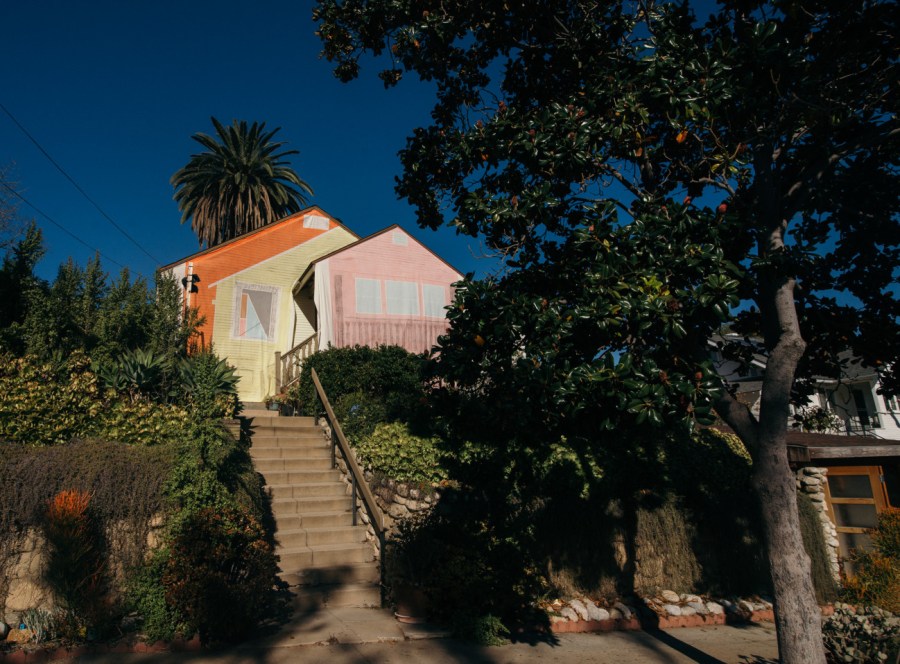 From the exhibition “Houses he wanted to build” at Adjunct Positions, Los Angeles. Photo courtesy of the artist

Carmen explains her artistic process as starting with a “temporary inhabitation” of a space and responding to it. Regardless of the process, her work always allows for a range of different readings. Her painting, “Pyramid” (2016) presented as part of her last exhibition, Alex’s Room at Commonwealth & Council looks like a minimalist painting that is surprisingly unconcerned with cleanliness. Much like the visible dirt on the canvas of “Handball Painting” (2014)–an interpretation of the generic handball court available at any LAUSD schoolyard–it is through a scribbling of the phrase “disney videos” that “Pyramid” reveals itself as a painting of the piled storage bins in the artist’s sister’s room. 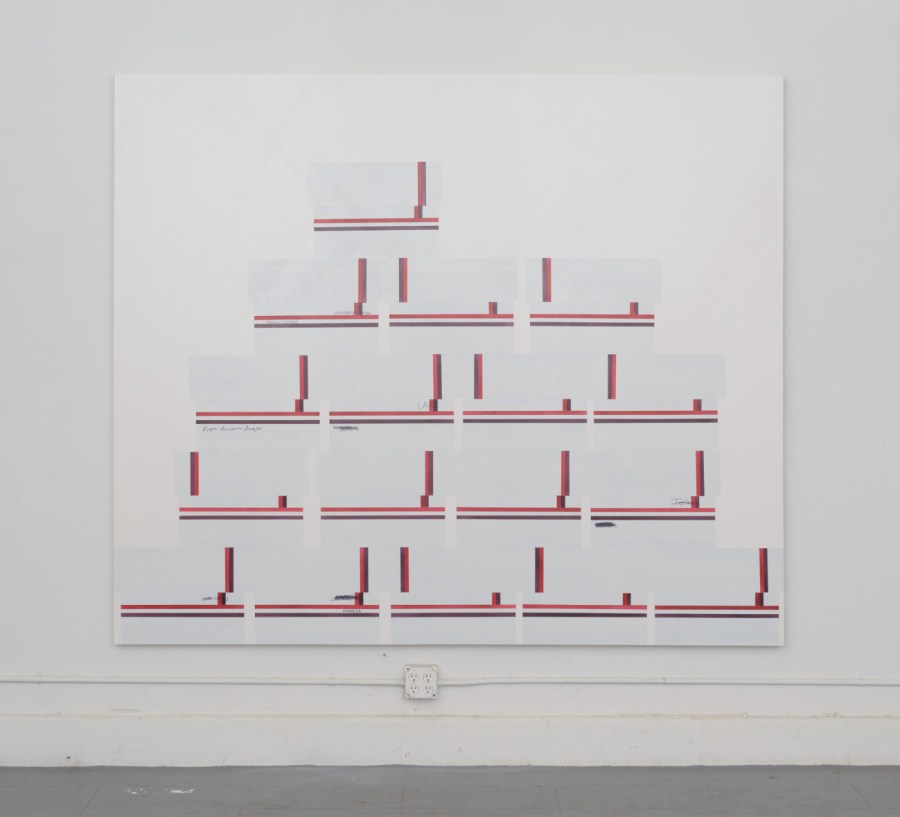 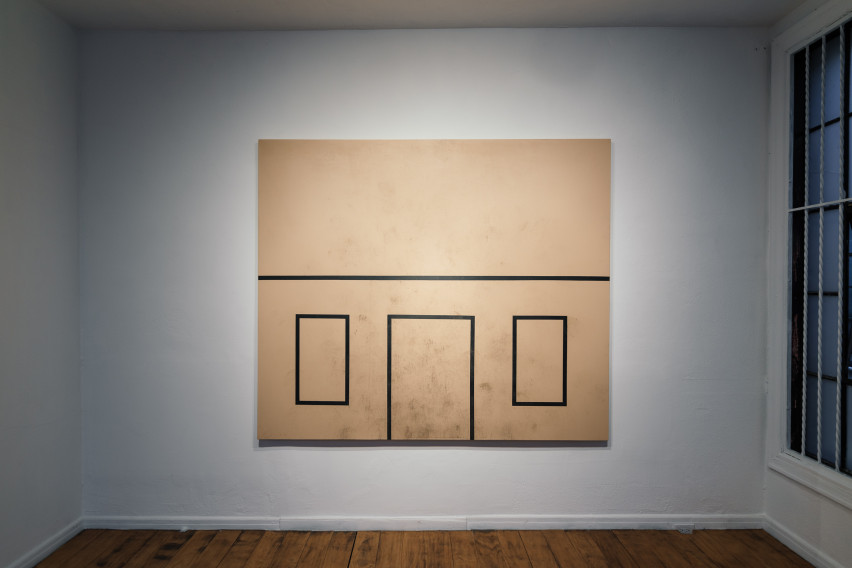 She tells me, “I’ve been thinking of porosity and how nothing is really this or that, and things are never binary. Our lived experiences and how we construct our sense of who we are and what makes us who we are is the accumulation of many simultaneous layers that are porous and inform one another. Aesthetics for me does not exist in only one layer. My use of minimalism is informed by my artistic education and recognition of the art movement, but it is simultaneously informed by my father’s architectural drawings that I grew up with, and by the lines painted in the handball court that I played on in elementary school. Porosity for me is connected to time, not just memory, but how the present is constructed by all these past layers of experience that are always changing too.”

As a traditionally trained artist who immigrated to the U.S. at the age of five, Carmen Argote diverges from the advocacy of the MFA program to abandon one’s biographical stories. Through her choice of personal subjects and partial isolation of otherwise generic imagery, it is identification rather than “identity” that is played out in her work. She turns to familiar subjects: her family, her father’s career in architecture, her sister’s room, and most recently, her grandmother’s ESL workbook. For a forthcoming public art project at the Armory’s “La Casita”, her grandmother’s answers to the workbook’s exercises–a series of prepositional verbs, adverbial clauses, tag questions, etc–are printed in the form of laminated lawn signs to cover the building and its surroundings at the community center that offers ESL classes. The repetition of the English parts of speech or units of syntax reflect the repetitiveness of the structure in which it is taught: the brutality of traditional ESL methods. The only parts extracted from the English workbook are the ones written by the ESL learner, presented as poetry in the format of SoCal’s lawn signage. This forthcoming piece, more than any of Carmen’s previous projects makes me think of the translational aspects of her practice in which she doesn’t abandon her subject(s), instead, contextualizes and juxtaposes the work so carefully that reveals its lineage. In this way the distance between the subject and the final work of art becomes an important aspect of its meaning making. Instead of the work funneling down ideas from the original subjects, it leaves the path open for the viewer to move back and forth along, imagining more than a mere “origin” and “destination”: 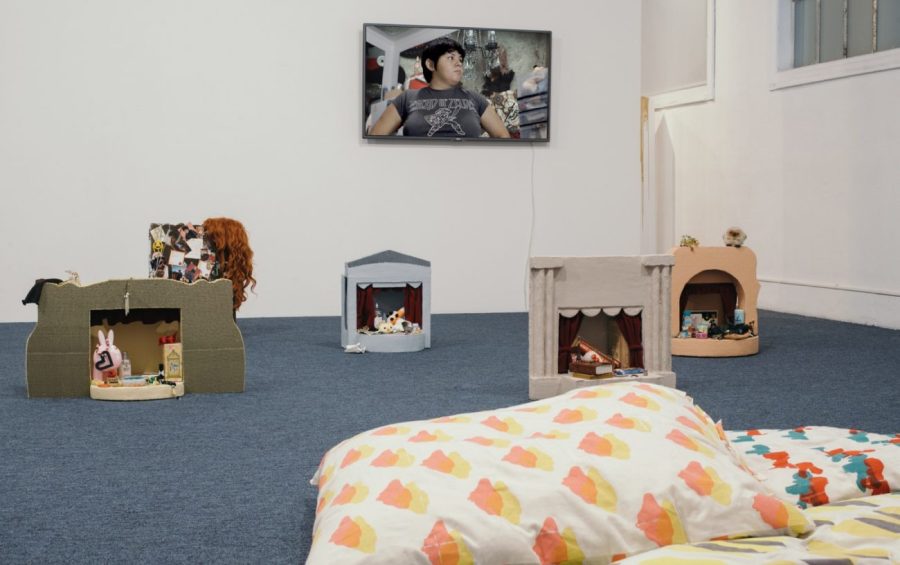 “My work is a translation of various layers of experiences that I hope transcends into art. Translation allows me to cite and bring in my way of seeing, and express the complexities and nuances that interest me. Inhabiting is a way of responding. It is a way to be in the present and be able to create something in response to the structure or the situation. I enjoy it because it allows me to work outside of a preconceived idea and allow the effect of the structure to inform me a lot more. Art for me has to cease to be what it is in terms of the thing itself and become something else, or a fluctuating something else–ceases to be only a carpet but becomes a painting/sculpture/plan and still a carpet. Sometimes context can do this; sometimes it’s a small change that creates this shift. Maybe it’s opening up the porosity so we can see the thing in a different way.”

Each project, in conversation with the previous ones complicates ideas of class and its attributed tastes through aesthetics, filtered through immigration and geographical displacement. In Mansión Magnolia, the neoclassical architecture of the space and the minimal, geometrical abstractions in the photographs are both brought into the gallery. How do we understand desirability and its hierarchies through this simultaneity? And how does her family’s penchant for neoclassical architecture and design, and her interest in finding the temporary “minimalist” formations in the banality of every day actions at Mansión Magnolia speak to the idea of a middle-upper class in the city of Guadalajara’s Mansión Magnolia versus the middle-upper class at the exhibition Mansión Magnolia at Shulamit Nazarian’s venice beach gallery? 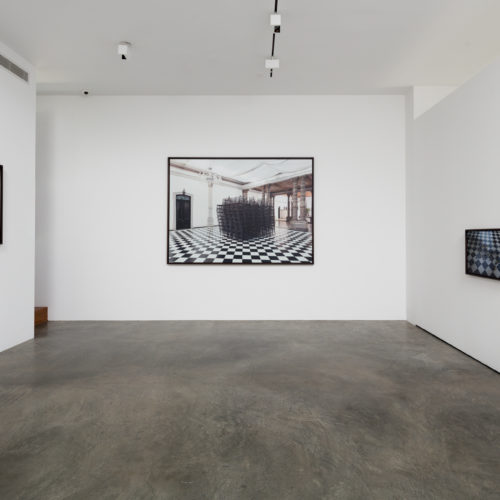 “I don’t think minimalism belongs only to the academic, to Donald Judd, or to the Bauhaus design school. Form following function has belonged to the working class for as long as I could imagine. It does not need a class frame to exist or be pointed to. I’m very interested in how aesthetics are used to create value, to convey good taste and class and wealth. To reflect desirability or a goal to strive for (I’m thinking of Ikea), I think that minimalism is everywhere. In my artwork, I point to it where it might not be named so, but is.” 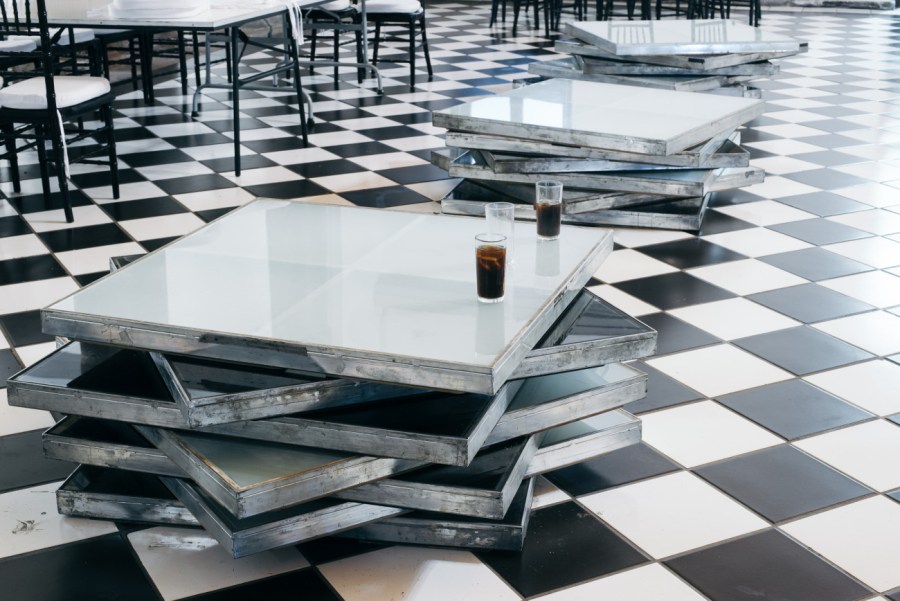 Carmen’s use of the identifiable brand of minimalism is subversive in that it draws the art educated or minimalist-aspiring viewer into a new and complex language and economy of aesthetics and the revelation of its class complexities and complicities. The pairings and simultaneities in her recent projects such as Alex’s Room and Mansión Magnolia raise profound questions about aesthetic value systems as formed by class, whiteness and other privileges. She continues to tell me, “Immigration is complicated. I thought about what it meant for me to be in Mansión Magnolia, being raised with parents who have great admiration for the neoclassical aesthetic, to be looking at form following function and seeing the people who work there stacking chairs and me taking my camera and saying that’s a minimalist sculpture. Again it ties back to porosity: I am Mexican and foreign in Mexico, I’m an artist with a fancy camera taking pictures of chairs by people who are making $8 a day. I think that this perspective is possible because of my immigration, it’s informed by a moving between different class structures, and having a personal connection to the cultural nuances.”

You can see Carmen’s work in Placebound, a group exhibition at Woodbury University’s Nan Rae Gallery.

Carmen Argote is a Los Angeles based artist whose work focuses on the exploration of personal history through architecture and the spaces that she inhabits. Argote received her MFA from UCLA in 2007 and attended the Skowhegan School of Painting and Sculpture in 2009. Argote exhibited at the Vincent Price Museum 2013, and was commissioned for the Metro Expo Line station at 17th/SMC station in Santa Monica. A Vast Furniture, opened April 2015 at the MAK Center for Art and Architecture and in the desert at a Hight Desert Test Sites location in Wonder Valley. This year, Argote opened two solo exhibitions, Mansion Magnolia at Shulamit Nazarian Gallery and Alex’s Room at Commonwealth and Council. Argote will be featured in Mi Tierra: Contemporary Artists Explore Place at the Denver Art Museum opening 2017. Argote’s work will also be included in The Getty Foundation’s Pacific Standard Time: LA/LA  Home-So Different, So Appealing exhibition, which will be held at the Los Angeles County Museum of Art in 2017.