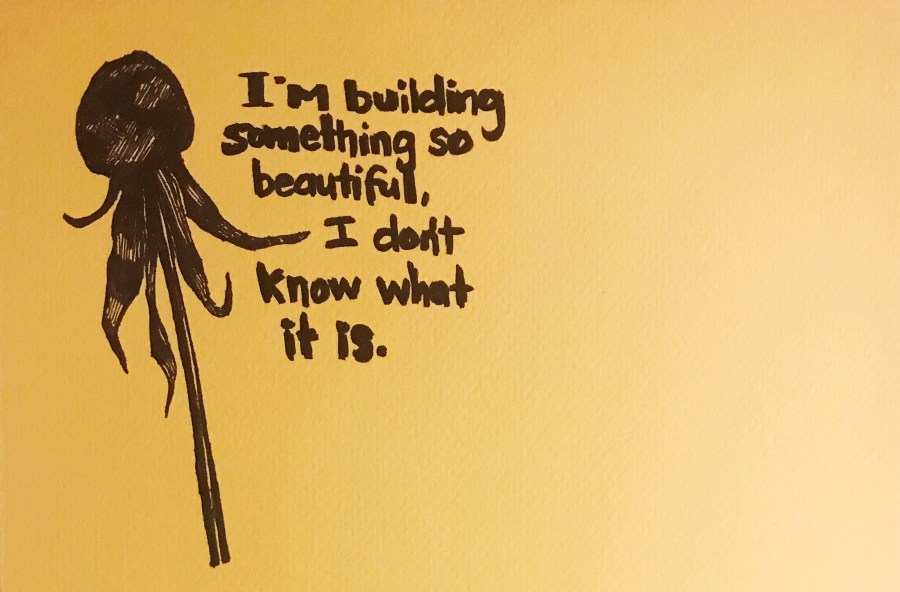 This text comes out of the University of California Humanities Research Institute residential group on “Queer of Color Formations and Translocal Spaces in Europe” (though the regions we work on also include the US, South Africa, India, and the Caribbean). The fellowship allowed eight of us to spend ten weeks together at UC Irvine in Orange County, i.e. in the heart of white suburban Amerikkka.

Many of us had known (of) each other, had worked together in various constellations, but we had never had been able to spend time together as a QTBIPoC group thinking through issues relevant to QTBIPoC communities. We came to this space from very different locations – for some it was traveling an hour up the road, for others it meant temporarily moving to a different continent; some came out of secure academic employment, others were outside of or just entering the AIC.

What we had in common was a commitment to community-centered scholar activism and a desire to explore what was possible, in spite and because of our differences. Our time together was not without conflict, we needed to get to know each other and we did – because we had the time and energy to do so, instead of having to spend most of our time and energy carving out a space in institutions, communities, orgs, that constantly need to be reminded we exist, among people who rely on our work but tend to turn it against us.

Our breath, existence, desires, and beings are constantly under attack in multiple and intersectional ways, so creating and claiming spaces for QTBIPoC is what is necessary for healing, envisioning and the creation of new imaginaries of decolonization. Since gender and sexuality are at the center of what decolonial scholars and activists called the “coloniality of power”, we argue that as QTBIPoC committed to fight eurocentrism and white supremacy, we have a lot to offer to decolonial theories and practices.

It can be a long road from isolation to collectivity. The coming together of a whole group of subjects, the production of a space of convergence, this very possibility, is opened up thanks to a history of struggles: of indigenous and Black struggles, of other PoC struggles, of QTBIPoC struggles, to which we hope we can pay homage even as we work to create something new.

QTBIPoC have everything to offer to make this world a more just, abolitionist and non-oppressive place because we live at the intersections of the gendered cis-heteronormative colonial-racist capitalist matrix and often our experiences and creative intersectional struggles embody imaginaries and practices that are committed to freeing every single one of us and the environment.

Claiming this QTBIPoC space meant taking for granted that there are queers of color in the world, who are existing and surviving every day, creating crucial spaces, forging complicated politics.

Claiming this space meant taking for granted that some of us dare to do this work even in the racial and colonial university, meant not having to authenticate racism or diversify all white and straight departments. It was also a way of building bridges between academia and activism in the heart of a western university system that is very elitist. Our academic theories are not isolated and are deeply rooted in political practices.

Claiming this space meant doing a bit less work trying to be translators, letting ourselves learn for our benefit and not for the benefit of the communities around us. Building reciprocal relationships, building alternatives to the dysfunctional institution.

Claiming this space meant talking about homonationalism, gay imperialism, queer gentrification and all the other messy complicated issues that we’re usually censored for. Talking about black and brown cis-heteropatriarchy even. Not being weighed down by the burden of representation for once. Having space for contradictions.

Claiming this space meant that there was a meaningful amount of time devoted to analysis of transphobia, anti-Blackness, and Islamophobia. Time to appreciate the capaciousness of these critiques beyond the sound-bite speed analyses that appear on progressive social media feeds.

Claiming this space meant being accountable instead of participating in the erasure of gender non-conforming and trans* BIPoC people.

Claiming this space meant reclaiming that person who knew stuff before we were disciplined through the academy’s rigors and violence, bringing things which we knew before we became academics and learned how to engage articles and book chapters in a substantive way.

Claiming this space, even if this did not dramatically challenge the global or even local power balance, drastically showed what it means to have one’s own perspectives, needs, visions centered and affirmed.

Claiming this space meant that critiquing these structures constitutes various art forms, from poetry to performance to theory to blog sites to films, to dance, to spontaneous conversations over coffee.

Claiming QTBIPoC spaces means thinking of us not as romanticized extreme subaltern subjects, but rather as imperfect subjects-in-process (Alarcon), both alienated and in revolt, as both internalizing our oppression and as agents who enact, create, construct other and more critically subalternative ways of life than would exist in the world were we not here.

Claiming QTBIPoC spaces means working really hard to put impossible subjects at the center and not at the margins like we usually are. And when we are not at the margins, we are often instrumentalized as victims of supposedly “backwards” cultures and religions that need saving from the West. So existing in a space where we are neither marginalized nor instrumentalized is a victory.

Claiming QTBIPoC spaces means a lot of strength to stand firm on our principles regarding decoloniality and anticapitalism. The way gender and sexuality plays a huge role in neoliberalism and neocolonial discourses forces us to pay attention at all cost and avoid being co-opted or complicit in the expansion of capitalist logics in the name of “equality”, “progress” and “gay rights”. It means being aware of the material conditions that produce identities and theories in the Global North, and being self-reflexive of our position in this coloniality of power that shape the world we live in.

Claiming QTBIPoC spaces means we have models of making a little go round a lot. We have experiences sharing resources and space. We are embodied beings who pee, who cry, heal from surgery, who are violently allergic to our white, cis, heteropatriarchal environments, who respond by building spaces that will take us into a future where we can all make it.

Community beyond the sanitized neoliberal definition and operation.

Transnational networks of care and collaboration.

Every fly cultural product, from voguing to slang like “slay,” that the dominant culture relies upon to make itself relevant.

Pedagogies that sustain our lives.

And what gets forgotten

QTBIPoC offers the world to be with you, whoever you are,

We are in it-with you

*On the name: gens -reflecting our collective and individual work on gender, generativeness, gentrification, queer regeneration, transgressions,
generations, genealogies – setting the groundwork for collaboration that is not invested in cisheteronormative, capitalist ideas of
production or reproduction, and also includes aesthetics and politicized beauty