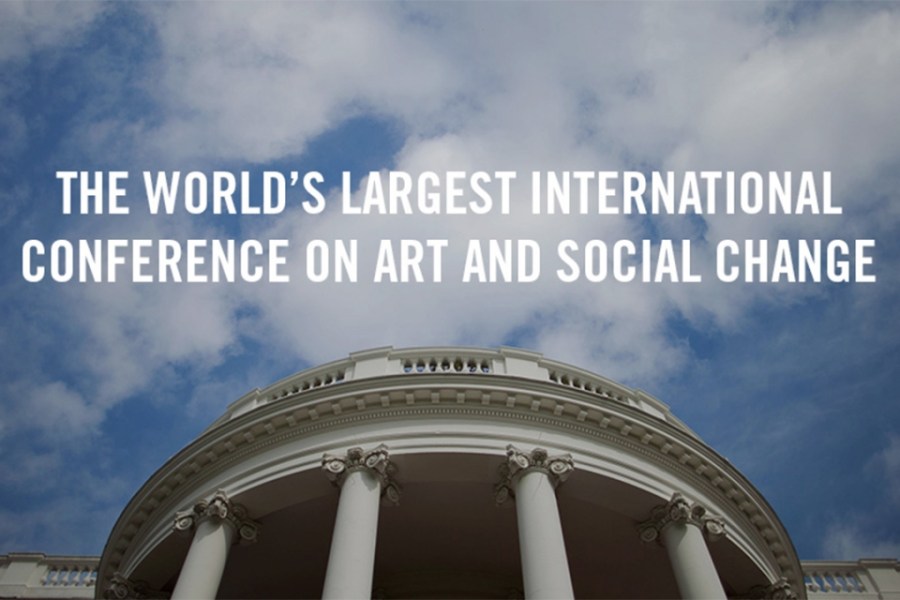 This letter was written by THE QOLEKTIV in response to Creative Time’s invitation of the founder of the Islamophobic group FEMEN, Anna Hutsol, who spoke at the CT Summit on Saturday, October 15, 2016. THE QOLEKTIV is an anonymous group.

We write to express our profound concern about Creative Time’s (CT) inclusion of FEMEN at this year’s Summit “Occupy the Future”[1] in Washington DC. CT has long foregrounded its commitment to social practice, the inclusion of global perspectives, and the intersection of art and social justice. The decision to invite FEMEN to speak at the CT summit, described as the “world’s largest international conference on art and social change,” is deeply disturbing and demonstrates a lack of nuanced engagement with the Global South as well as diverse communities in the US by the organization.

Critiques of FEMEN are widely circulated and easily accessible. They include the ways FEMEN reinforces and perpetuates three very dangerous claims at once: a deep rooted Islamophobia and racism embodied in current American and European politics; the equally problematic assumption that there is a singular, universal feminist position; and the arrogance to presume to speak on behalf of women all over the world, some of whom are deemed by FEMEN as too oppressed to speak for themselves. FEMEN has been repeatedly critiqued[2] for the Islamophobia and xenophobia that inform their specific choices and actions. Their performative tactics such as “topless jihad” frequently target Muslim women who they claim to be liberating from both ‘Islam’ and Muslim men. When confronted with Muslim women’s rejections of such Western ‘FEMENism’, FEMEN leader Inna Shevchenko patronized the women involved, declaring, “They write on their posters that they don’t need liberation but in their eyes it’s written ‘help me.’”[3]

FEMEN has also drawn sharp critiques from feminist political spaces[4], ranging from its Eurocentrism, to its abolitionist position on sex work. These critiques represent complex internal debates within feminist circles that are often subsumed by the imperialism of mainstream liberal feminism. Saviour feminism’s focus on Muslim women’s bodies as objects of liberation is the same justification that is used by neo-imperialist war machines (Afghanistan, Iraq, etc.), as well as the tidal wave of xenophobia in Europe and the United States, and global election gains by the far-right[5]. Feminism’s reaction to the hijab has been instrumentalized by war and xenophobia and is well-documented in feminist scholarship such as Joan Scott’s The Politics of the Veil and Lila Abu-Lughod’s Do Muslim Women Need Saving. These texts, and others like them, should be required reading for any organization focused on social justice issues.

Creative Time has seen controversy before, including the withdrawal of Mosireen and Rebel Diaz from the 2012 Summit [6], and statements by speakers on stage, in support of BDS (the Palestinian-led Boycott, Divestment, Sanctions movement). This was followed, in 2014, by the withdrawal of artists from an exhibition curated by CT and the wide circulation of a petition [7] with signatories including Gayatri Spivak and Judith Butler, amongst many others, encouraging artists to withdraw from the exhibition “Living as Form: Socially Engaged Art 1991-2011,” when the show traveled to Israel in violation of BDS[8]. Creative Time responded[9] to these two events by stating that they had learnt important lessons and would improve their organization’s internal processes. However, as this most recent event illustrates, this “education” has not happened in any significant way. The fact that CT did not engage in due diligence illustrates lack of research familiarity with the topics they engage with.

This would involve, first and foremost, taking seriously this question: “Who is in the room when these decisions are made?”  Acknowledging Creative Time’s commitment to “engaging a broad audience”, we urge CT to move beyond its existing paradigm of learning lessons on a case by case basis, and only retroactively, after being held accountable by artists of color and activist communities. Creative Time needs to address the structural issues which allow these mistakes to be made time and again. It seems clear that at no point in the processes of brainstorming, planning, and execution of the 2016 Summit did any of Creative Time’s staff, colleagues, or consultants show awareness of the numerous, widely disseminated critiques of FEMEN’s complicity with Islamophobia and neo-imperialism.

The primary problem is the absence of significant diversity at all levels of Creative Time. This is symptomatic of other pervasive exclusions that are visible in art institutions writ large. We wish to be clear that the inclusion of FEMEN this year cannot be rectified by strategies of piecemeal “inclusion” and “diversity”. This problem will not be solved by inviting Muslim feminist groups to speak next year, or by bringing on board a series of “native informants” as outside consultants, junior interns, or special guests. Rather, what is required is the decolonization of the entire staffing system of Creative Time, and all such arts organizations based in Europe and North America. This is the only way in which a total restructuring of long-term decision making processes will happen.

We believe that Creative Time should publicly acknowledge the grave error they made in extending the invitation to FEMEN, and commit itself to a radical restructuring. Without such structural changes, arts organizations like Creative Time simply cannot expect to have their claims around social change and justice be taken seriously by artists from diverse communities or indeed the majority of the world.

[5] Xenophobia in Europe and America
http://www.theatlantic.com/politics/archive/2016/08/muslim-women-trump-islamophobia-ghazala-khan/496925/

It has been a few years since either of us at contemptorary attended the Creative Time Summit or watched its streaming online. This year, as we were working on a few writeups and interviews with the artists and curators we admire, we were reminded of the Creative Time Summit in the most unpleasant way: “CTSummit invited Femen to speak this year… It makes my head spin,” a friend messaged one of us on twitter. Seeing their message our heads started spinning too. We lost focus and forgot what we were writing about. All we could think of was “why would they possibly do this… now?”

We, at contemptorary do not believe in the idea of “letting go” or “negative attention is still attention” or “ignoring is the best strategy”. As much as we believe in putting our energy into something “constructive”, we also acknowledge that sometimes we are simply depleted, and burnt. However, letting go, the benefit of the doubt, ignoring the damage and so forth are strategies that only serve pre-existing dominant narratives and neoliberal transnational white supremacy: “Shouldn’t we talk about it?” “It’s provocative, let’s have a dialogue!” is the oppressor’s passive aggressive way of telling you that your criticisms are secondary, and irrelevant, “subjective”, “emotional”, “reactionary” and not as necessary as the “interesting” ideas that will be presented first. If the theory “It’s provocative, let’s have a dialogue!” is true, then they are sadistically intending to cause pain—it is pain directed at those who have already stated that it is not provocation but damage. Pain directed at those who have experienced the provocation and have written about it, who cannot write about it–to only look up to see white girls pontificating about a liberation only they dream of.

This particular pain is directed at those who live with the wounds of colonialism and its brand of white feminism. The pain is directed at those who like me–GK–is worried every time a parent, a relative, a grandparent boards a plane in the U.S. or in Europe, and travels with what they mark as a broken English; every time I’m (re)present(ed) as my passport photo in full hijab at an embassy, asking for a visa to be issued to my 32 letter first and last name. The pain is directed at me who shivers every time a family member doesn’t make it to their child’s, friend’s or sibling’s funeral, wedding or graduation ceremony because they were rejected visa or they did not get “cleared” in time. FEMEN gave a talk at Creative Time Summit as I was, on the one hand lamenting my aunt’s recent death in Canada, and grieving that my oldest aunt didn’t get her Canadian visa to see her sister one last time before she passed away. These are wounds that will never ever heal, and they are caused by the control of one group in power over the pain, pleasure, life and death of the other; in other words, racism, xenophobia and Islamophobia materialized as policy, law and regulation, and lived experience for some.

With our endorsement of the above letter directed to Nato Thompson, the organizers at CTS, and to Femen, we ask that you stop with the harm! If you are going to continue: you need better strategies in promoting damaging art–you are barely trying to cover up the fact that what propels you to this practice is how much you enjoy the replication of oppressive colonial power dynamics. What Femen portrays are not strategies or roadmaps to liberation for black, brown, Muslim women–what Femen portrays is white power, white privilege, colonial savior fantasies: peak white feminism.