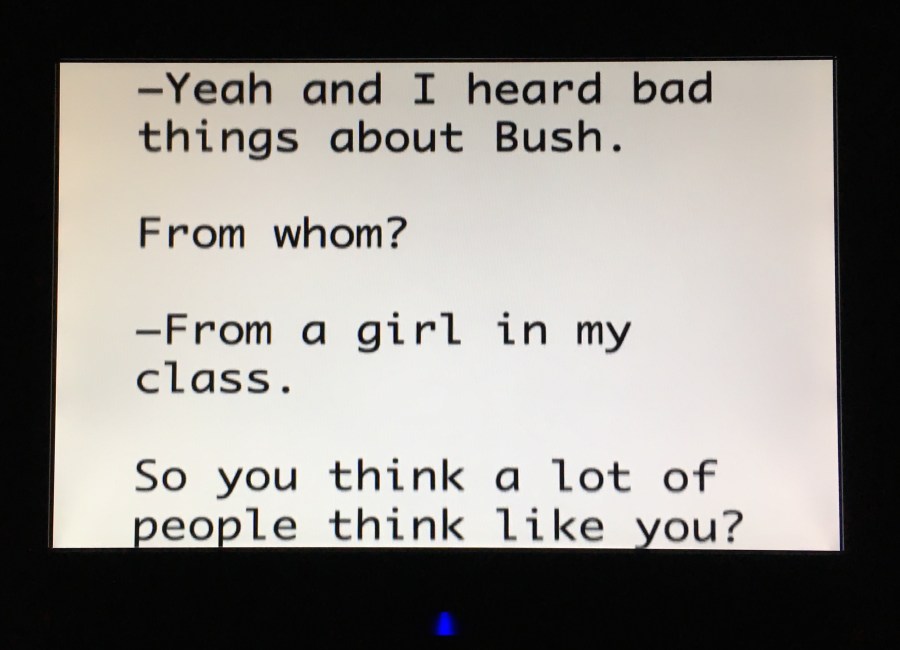 Still from "After Before", Sharon Hayes

As this year of all kinds of wonders come to a closing, I’m going to try to remember it through a list of things, exhibitions and events with interesting linkages. This list is in no way all inclusive or written from “perfect memory.” This year was full of death and destruction, and I’m not only talking about the celebrities and our beloved queer icons. It’s truly hard to remember all and anything that inspired me in the moments of doubt, when rethinking the purpose of art, and writing sounds the most urgent for survival, if not vitality. So here is my imperfect attempt:

The first exhibition I saw in 2016 was Walid Raad at the MoMA in New York, including his “Walkthrough” performance. Flash-forward to December: Raad’s name appeared in the Foreign Policy list of of Global Thinkers 2016 for “blurring the line between fact and fiction”. Besides the reductionism and over-simplification that happens in this really bizarre list, over the course of this year I felt like I was re-living Raad’s Walkthrough performance over and over again, including when I saw the Global Thinkers 2016 list and Raad’s name on it!

Back in LA I attended Martine Syms: A Misdirected Kiss as part of the Tip of Her Tongue series curated by Jennifer Doyle at The Broad. The format of Martine’s performance oscillated between studio visit, artist talk, and lecture performance. Over the almost one hour of the performance we bore witness to the artist using the desktop of her personal computer as a palimpsest where events, images, sounds, and memories were being added on top of one another, instead of replacing each other. The accumulation of these layers, some visible, some semi-visible and some completely hidden worked like an extension of the artist’s memory. The internet was mediated through the way Martine “browsed it” at the same time as browsing her own memories and personal files all meanwhile shared with the audience through projection.

Later in March Non-fiction opened at the Underground Museum. The exhibition is Noah Davis’s “love letter to the victims of racial violence, and the families that endured.” This tastefully curated, poignant selection of works will be on view until May 2017 and shouldn’t be missed!

In September, Erin Christovale curated two exhibitions at the One National Gay and Lesbian Archives. “A Subtle Likeness” and “Memoirs of a Watermelon Woman”, celebrating “the legacy of queer filmmaker Cheryl Dunye and the twentieth anniversary of her seminal film, The Watermelon Woman.” The archival photographs, and footages from the Memoirs of a Watermelon Woman–including the mesmerizing Fae Richards Photo Archive by Zoe Leonard–were installed around the upstairs mezzanine where you could look down and see the One Archives in the middle on the ground floor. This spatial arrangement made it clear that if the queer archive is marginal to other archives, the Black queer archive exists on the margin of this already tertiary history. After spending about an hour with this material, as an Iranian queer, with almost no officially recorded queer past or archive to return to but the pages of Afsaneh Najmabadi’s “Professing Selves”, I felt a sadness for my loss. But Dunye’s brilliantly rogue and perverse ways of entanglement with History that is adamant at erasing her past was wildly expanding my imagination as I took the stairs down to arrive at A Subtle Likeness.

On the east coast, Decolonize This Place–an action-oriented space around indigenous struggle, black liberation, Free Palestine, global wage workers and de-gentrification–began their residency at Artists Space Books & Talks. Last week we learned that a group of nine activists leaving the closing party of Decolonize This Place’s residency at Artists Space were attacked by you know whose supporters, which is chilling! Decolonize This Place is important, because unlike most innocuous social practice art collectives, they center a few crucial goals in their movement: they are queer, abolitionist–which I hope one day will be one and the same, hoping there will be no queer that is not an abolitionist. They are decolonial in the sense that they critique art washing whether it happens in more contemporary packages such as gentrification or when art and culture are used by Israel as a way to distract us from the fact that it is a settler colonial state. You can follow their actions by following them on twitter: @decolonize_this.

It was so refreshing to see Sharon Hayes’s After Before at UC Irvine University Art Gallery. In this “quasi-documentary multi-channel film, two figures interview people on the streets of New York City throughout the month of September 2004 – just two months before the 2004 US Presidential Elections”. When I think about the grave amnesia that eight years of the Obama Administration brought the American people and the people around the world, I am amazed at how my generation of mostly white Americans have almost no memory of the years that followed 9/11. I remember those years very clearly because my brother’s immigration process began right after that in 2002 when we first heard about the additional “security measures” put in place for travelers from “certain countries”. These “measures”, of course continued to last until I moved to the States in 2009 and arrived in LAX… I’ll talk more about that in the last paragraph below.

In November, Duke Press published Christina Sharpe’s In the Wake, a book in four chapters. The first chapter “The Wake”, begins with the wake of the author’s lost family members and loved ones. It continues to “The Ship” that offers a much needed critique of Allan Sekula and Noël Burch’s The Forgotten Space and continues to “The Hold” and “The Weather.” Hannah Black wrote a great review of the book on 4 Columns. And Rinaldo Walcott writes, “Christina Sharpe’s deep engagement with the archive of Black knowledge production across theory, fiction, poetry and other intellectual endeavors offers an avalanche of new insights on how to think about anti-Blackness as a significant and important structuring element of the modern scene.” You should read it!

Also in November… 55% of white women voted for you-know-who.

If you’re interested (I hope you are) in catching up on the ongoing work of Gulf Labor Coalition, artist and thinker, Naeem Mohaiemen recently penned a great essay published in the Walker Magazine with accompanying images by Hans Haacke. In the essay he writes: “Defiance is welcomed when it is sanctioned and staged as art. Drill a crater in the floor, flood a gallery, embalm an animal, smash an object, stage a pitiful death—critics hail these gestures as having the power to ‘shape worlds.’ But when artists sit down at a conference table with museum administrators and read from a list of demands for labor rights, this work—involving conversation, negotiation, research, protest—suddenly becomes illegible to the same museum. The artists whose projects were previously praised as stretching boundaries are now tagged as maverick spoilers.” Lastly, Negar Azimi wrote an elaborate piece on the history of the movement that comes full circle to Walid Raad’s “Walkthrough” performance if you read in full here.

In the last few days of this year Obama Administration dismantles NSEER, the already existing Muslim and Arab Registry that was put in place by the Bush Junior office. When I arrived in the U.S. in 2009 the officer who interviewed me handed me a pile of forms and circled around something on one of them and said: “When you leave, you go upstairs and report.” “OK”, I said. Later I learned that was NSEER I was registered with.

things are not that different!

My second social media wish for 2017: everyone follows @mari_matsuda @SaraNAhmed and @nanpansky on Twitter if they don’t already!