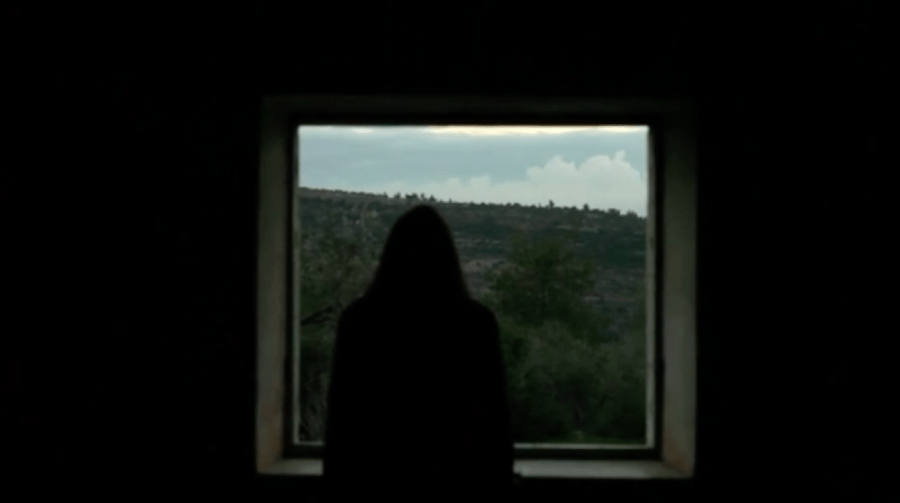 I see The Incidental Insurgents for the first time in a small crowded theatre in Montreal. I hear a man say, “The landscapes are so beautiful.” Ruanne Abou-Rahme and Basel Abbas’ piece consists in a rapidly moving assemblage of sound, text, and image. The work is dense and voluble, yet it does not rush resolution. It does not show me landscapes, and I wonder if this is because I wasn’t raised to see them. 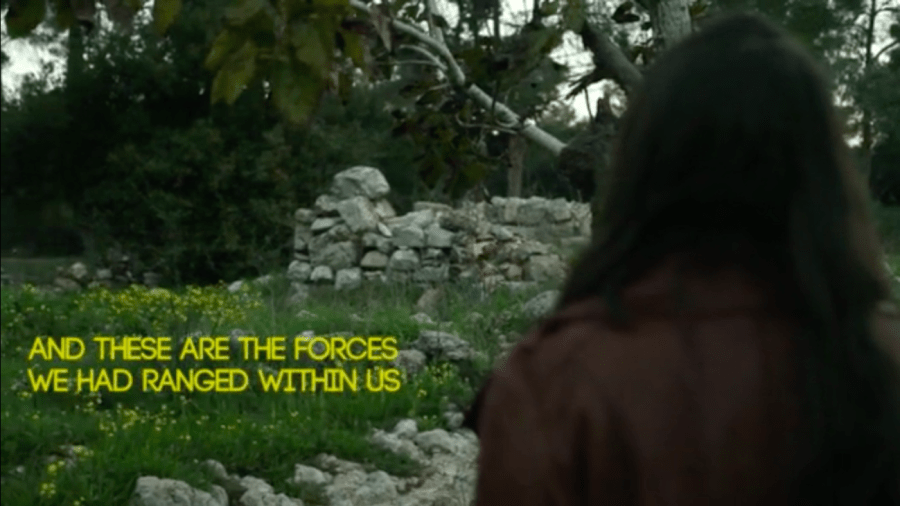 As a colonial framing device, the landscape will enact force, but it will refuse to name power. The landscape as tableau is purely exoteric and intentional about this purity; it is always preceded and followed by both the premise and the promise of absolute legibility. In Sufi literature the exoteric is expressed as zahir ظاهر, what is exterior, apparent and visible, while the esoteric is baatin باطن, what is interior, (un)seen and hidden. The word baatin باطن itself is derived from bat’n بطن, meaning the belly. I understand the forces called upon by Abou-Rahme and Abbas as esoteric, and I am not saying that the artists are casting spells (although they very well could be). The esoteric events I would like to discuss are gestures that reveal the inner workings of history and territory. When the sentence “And these are the forces we had ranged within us” appears on the screen, the forces invoked by the artwork are untimely, they are brought back from the land, and are simultaneously found (again) in the body.

Articulations of Indigenous and diasporic resilience cannot be flattened. I read this resilience as esoteric form because it is at once embodied and removed from linear understandings of time (hence revenant). Just like the gravity that pulls us toward the earth, our knowledge of colonization, the mnemonic fullness of decolonial struggles past, present, and future, “these forces we range within us,” are stored in the belly. This may be what makes them so easily undetectable to the settler gaze, even when they are revealed, if not especially when they are revealed. The white man will always insist on searching for beautiful landscapes.

To the Arabic reader who is also in some capacity an English reader, witnessing The Incidental Insurgents is an exercise in diasporic ubiquity. I am stuck between two languages, and struck by the rapid pace with which Abou-Rahme and Abbas deliver their words. Events of translation and verification stretch and overlap rapidly. They accumulate in a hazy location, a kind of linguistic limbo, yet the place is by no means exilic.

The politics of translation are discussed in Nasrin Himada’s piece, “For Many Returns” in which they examine The Incidental Insurgents. The essay tackles an especially difficult and beautiful case of translation, that of “for many returns.” And it feels important to add here a proposal to the contributions they’d been compiling because of how intimately revenance and return seem to be working together in Abou-Rahme and Abbas’s piece. This relation between revenance and return carries in it untimely inner motions, a capacity to invite transformation and to evoke transfixation. I find revenance in the velocity of The Incidental Insurgents; it does not stop at inviting shadows, ghosts, and ancestors into the work, rather it extends to the modes of disassembling and reassembling time, image, text, and language; it extends as well to the citational processes by which historical events and literary fragments are translated, collapsed and reshuffled. Revenance is what allows for the prefiguration of the returns that have not yet happened in the face of Israeli occupation.

I cannot and will not attempt to translate here the notion of Palestinian Return, which is distinct in Arabic from that of return in general. However, I am interested in understanding how the formation “many returns” itself may be doubly untranslatable to Arabic due to the very structure of the word return.

Like in the English and French languages, Arabic words can be built through occasional use of prefixes, suffixes, and infixes however, their main operation involves the transfix. We speak of transfixation when a word decides to collapse and rearranges itself into another word, which is new but never completely other. When you open an Arabic dictionary, words appear and reappear as familiars, as discontinuous extensions of each other. They live horizontally in genealogy.

To repeat, to (re)iterate, to restore, to return something or to put it back in place
a-aada, أعاد

And I am especially fond of this one.
adad, عدد
You look at it, you say it, and you find that it is already counting.

Maybe the expression “many returns” cannot be translated into Arabic because the return is already one and many. In this sense, Abou-Rahme and Abbas’ work itself may be approached as an experiment in transfixation. I want to say that the return itself is counting, and losing count in the face of the urgency of a great many returns. And maybe these returns cannot be understood or localized in their abundance, because they are now so many that they exceed the capacity of the single figure. What prevents translation here is the event of revenance in transfixation:  “To Reappear as Another Figure” precedes immediately “To have Many Returns.” Most importantly, these returns are rehearsing restitution: that is the settlement of “the debts of history” laid before the eyes of the viewer by Abou-Rahme and Abbas. 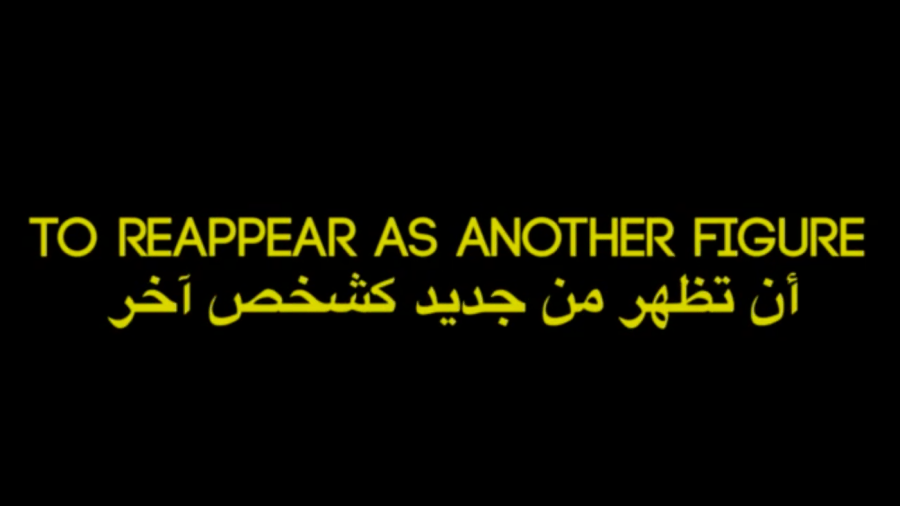 The landscape is resisted throughout The Incidental Insurgents, and maybe this is most felt in the invocation of the vast freedom of the ghosts that inhabit the land. I read this as the superimposition of the common over the idea of the landscape. A form of common land is still alive in Palestine, Al-Mashà. In her piece “Al-Mashà (المشاع) or the Return to the Common,” Palestinian architect, Sandi Hilal, is interested in how the notion of Al-Mashà could facilitate the reimagining of the common today, that is the reimagining of how we care for land, and I would add, how we circulate and encounter each other through it. The word المشاع invokes both a radiant location, meaning an expansive place that is opposite to enclosure, and the core center from which a radiant circulation of bodies emanates. Al-Mashà welcomes the one and the many and allows for unsurveilled freedoms that are at once caring, individual, and collective. In meeting ghosts, Abou-Rahme and Abbas’ work restores these freedoms, and presents us with the infinite possibilities of resistance that live in transfixation.

When you are not searching for landscapes in The Incidental Insurgents, you encounter the land of course, which is beautiful. You see Palestinian artists at work. You may be able to grasp the contours of their friendship. You see shadows roaming and resting. You may see ghosts. You may witness a revolution and/in revenance. You may hear tales of failed rebellions and feel a great sense of sadness. You may attempt to translate poems on the spot. You will be shown graves and futures, maybe even the common. You will be informed that countless seeds are waiting below the ground.

All of the above is being saved by love because Abou-Rahme and Abbas’s invocation of grief is never separate from the abundance of survival. When they name the overwhelming forces at play in the territory, “the forces ranged against them” are followed with and countered by “the forces ranged within them,” the land lives as witness.

Born in Casablanca, Nazik Dakkach currently lives in Tiohtià:ke (Montreal) where she is an MA candidate in Art History at Université du Québec à Montréal.