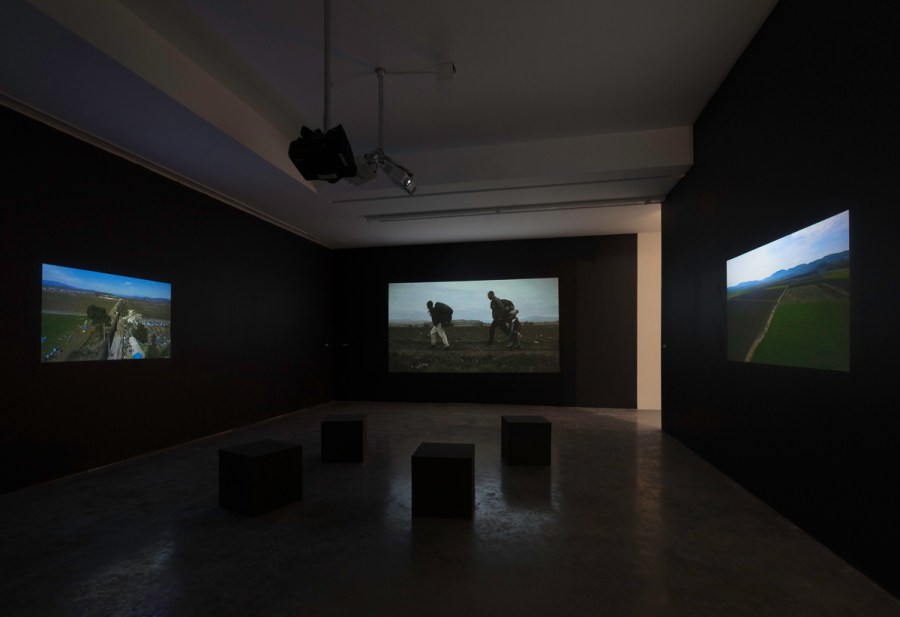 Around 90 to 95 percent of tissues of things that are eaten in the water column get recycled. As Anne [Gardulski] told me, “Nobody dies of old age in the ocean.”

—Christina Sharpe, In the Wake

Today the ocean may seem like a coherent body of water, as if all the scars made from the keel of the slave ships have healed at once. But even though over two hundred years have gone by, the bodies of Black and Arab refugees keep washing off the shore of Mediterranean and the Strait of Gibraltar, connecting it to the Atlantic triangle between Africa, Europe and the Americas.

I am conjuring up this history while looking at the world map in Pacific Standard Time in Los Angeles. “To begin with, nothing is obvious,” reads Thomas Keenan and Sohrab Mohebbi’s joint curatorial statement for It Is Obvious from the Map, an exhibition that examines the role of maps and map-making in the movements of large numbers of people from the conflict zones of the Middle East and Africa toward Europe. After its debut as part of the 3rd Istanbul Design Biennale, the exhibition has travelled to CalArts REDCAT Gallery in Los Angeles from March 25th to June 4th, 2017. Borrowing its title from “a detailed annotation on a fragment of a map depicting the border between Hungary and Serbia,” the exhibition examines the maps made by refugees and asylum seekers in order to navigate the larger maps of the state that surveils, controls and criminalizes their movement. The different works in the exhibition show how technologies of mapping used for militarization, occupation, and control join with the subversive uses of mapping for dissent: to surveil the state’s surveillance and culpability in kind.

In the Los Angeles iteration of the exhibition, the antechamber of the gallery at REDCAT surrounds the viewer with four videos on the four walls. Two videos by Drone Media Studio show footage of the Greek-Macedonian border on opposite walls. Meanwhile, Maria Kourkouta depicts movement traversing the same border from an angle close to the ground. The sound of the video is the sound of moving bodies on foot, alone or in groups. With a slight turn of the head, these sounds of panting and walking blend with subtle notes of music and indistinct conversations, mostly in Arabic and Farsi, coming from a small screen on the opposite wall. Tomas van Houtryve’s “Traces of Exile” collages the Instagram posts of asylum seekers onto a slow motion, long shot of the actual sites the photos were taken: Chios Island and the Port of Piraeus in Athens, Greece, among others. These “digital crumbs”—as the artists refer to them―make ghostly appearances to fading, non-diegetic sounds of music and chatter from their creators. In the gallery, the temporality of the victorious selfie is juxtaposed with drone footage that captures movement at a faster speed than the moving subjects. In March of 2016, as the man-operated drone flies fast and freely above the heads of the refugees walking toward the Greek-Macedonian border, officials declare the border closed to “illegal” migrants. 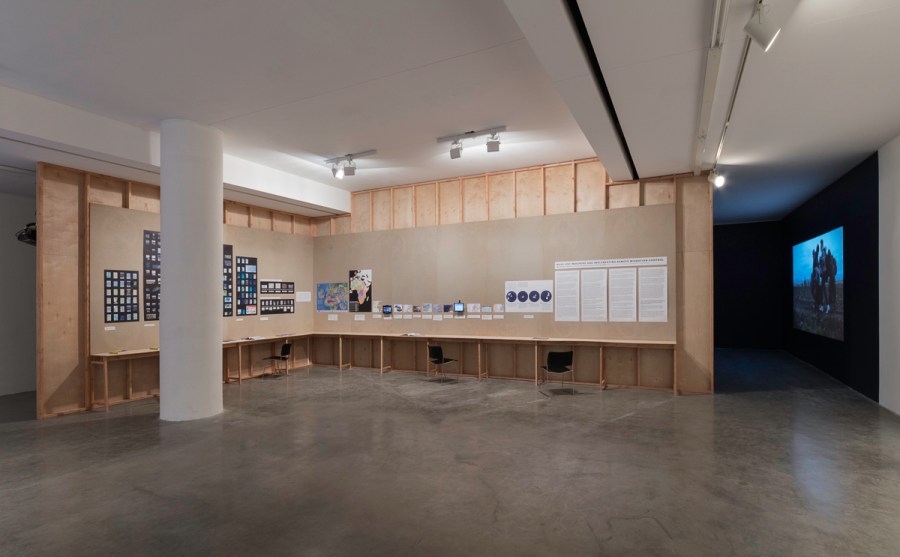 Each technology here documents movement on land with its spatiotemporal blind spots. Meanwhile, our waters are increasingly surveilled by a pan-European alliance to “prevent the Mediterranean from becoming a graveyard for refugees.” In the gallery’s next room, we are witness to the scrutinization of such claims in Charles Heller and Lorenzo Pezzani’s work of “Forensic Oceanography.” Liquid Traces: the “Left-to-die Boat” Case investigates how sixty-three migrants lost their lives while drifting for fourteen days within the NATO maritime surveillance area. “The Forensic Oceanography report turned the knowledge generated through surveillance means into evidence of responsibility for the crime of nonassistance” reads their website, availing a 90 page report including witness accounts, maps, chronologies, and correspondences with NATO authorities, among other evidence. The report asks, “given the on-going military intervention and in particular the operation aiming at monitoring the MSA involving 16 naval assets on 4 April 2011 and mobilising extremely sophisticated sensing equipment, could participating states/NATO not have detected a Zodiac boat approximately 10 metres in length drifting very slowly during 14 days, 11 of which within NATO’s MSA and the remaining three within the highly surveilled Libyan territorial waters?” 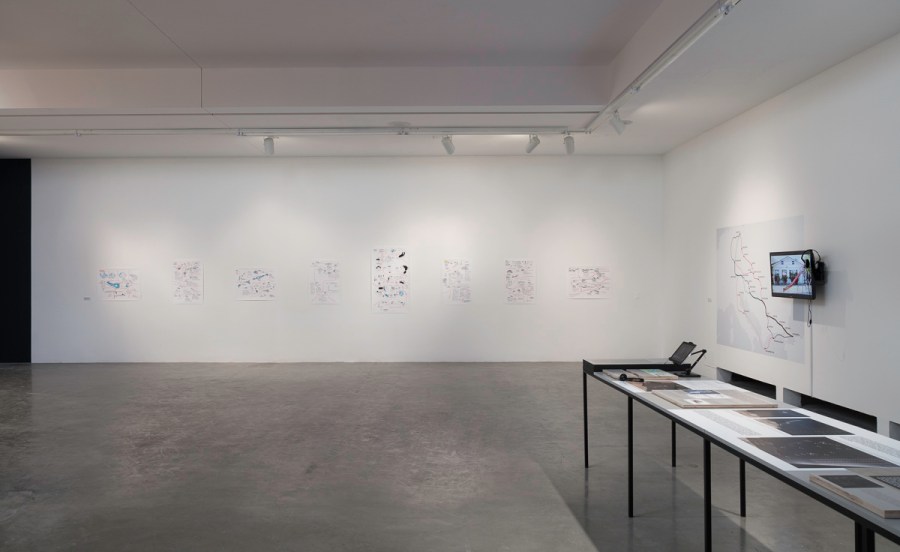 In the entrance of the main gallery, an ostensibly pedagogical space, copies of a book with the word “اروپا” on a bright yellow cover are laid modestly on a table. Thomas Dworzak, in collaboration with a group of Magnum photographers and journalists, created Europa: An Illustrated Introduction to Europe for Migrants and Refugees as a “welcome note” to the refugees arriving in Europe, which incorporates practical information (in Farsi, Arabic, French, and English) in the spirit of a travel guide. On the opposite wall, a collection of handwritten notes and illustrations by Djordje Balmazovic (Škart collective) in collaboration with asylum seekers in Banja Koviljača camp in Serbia embarks the viewer on a narrative as told by multiple voices. They provide illustrated accounts of the refugees’ movement, navigation, encounters with the state, police brutality, instances of bribing, and other experiences recalled. As the exhibition moves through multiple tenses and temporalities, a multitude of voices appear to speak and address the crisis. This culminates in the main gallery as a cacophony of “I,” “you,” “we” and “they” meet on the map where different histories collide at the point of crisis. However, the convening of all these voices would have been white noise without the illustrations by the refugees (in collaboration with Škart collective) covering the walls around the entire main gallery. Through immigration procedure, refugee accounts are constantly reduced to testimonies for the state, and used as evidence to support their asylum cases. As the states around the world collect an archive of asylum testimonies in the form of “affidavits,” these delicate accounts provide a counter to the violence of official record-keeping practices. 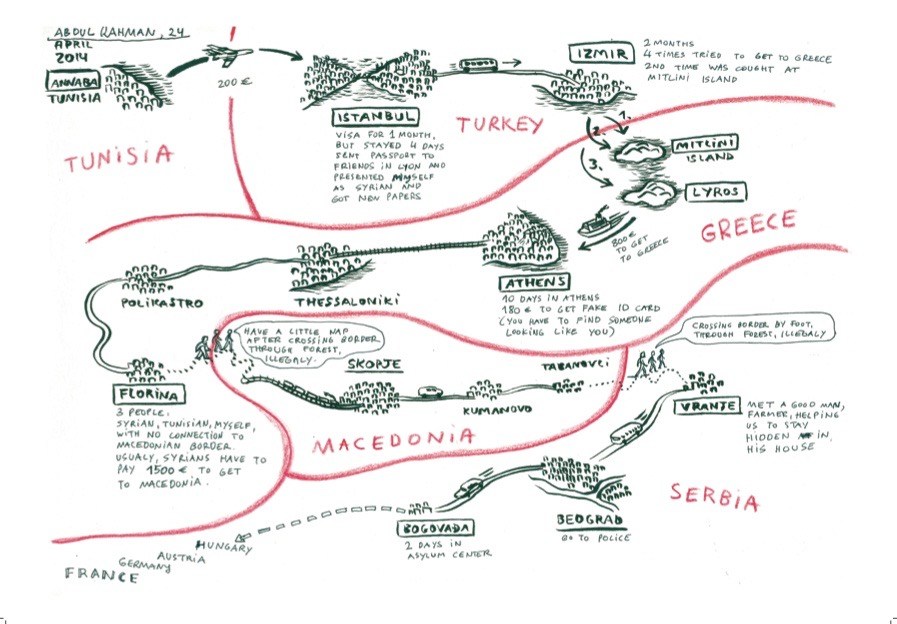 It Is Obvious from the Map is invested in refugees’ contribution to the unique means of knowledge production that is mapmaking. The exhibition is grappling with abstraction, translation and the production of knowledge in a way that is never separable from the context and history from which the crisis has arisen. Instead of ethnographic (and pornographic) depictions of the “refugee condition,” always bound to fail, the exhibition contextualizes the crisis within the map. Beyond navigating one’s path through bordering countries in Europe or across the Mediterranean, the map is necessary to locate this moment of refugee crisis within the larger colonial history that has controlled the worth and corresponding mobility of humans, as well as other species across centuries and the globe.

Though it occupies the specific geographical context of refugees’ movements toward Europe, It Is Obvious from the Map refuses to give the crisis a timestamp. It attempts instead to make obvious from the map that the crisis has been constant and without interruption. Looking at the map, it becomes obvious how movements of populations from the Global South are caused by the global and racial capitalism of the north―structures that, like hazardous waste in the ocean, have contaminated our waters. Looking at the map, it becomes impossible to attribute the displacement of peoples to “regional” economic or political forces, rationalized through historical amnesia and colonial myopia. As Christina Sharpe succinctly states in her latest book, In the Wake: “The crisis is often framed as one of refugees fleeing internal economic stress and internal conflicts, but subtending this crisis is the crisis of capital and the wreckage from the continuation of military and other colonial projects of US/European wealth extraction and immiseration.”

The refugee is hypervisible. Their stories appear on our newsfeed, and there are organizations, non-profits, rescue teams, art projects, panel discussions and conferences dedicated to them. Many a documentary film, tens of exhibitions, roundtables and interviews are produced “about them.” But most of these accounts (of both the refugee and the crisis) are produced by and for the citizens of the un-developing world, who Fatou Diome refers to as “the ones who have the money and the right kind of passport.” Movement is only visible when it is controlled, surveilled and criminalized. What is obvious from the map is the way the movements are connected in an equilibrium of human life, bodies, profit and power. Like bodies of water connected through a strait, our movements are a result of what Lisa Lowe defines as “the intimacies of four continents.” In her book of the same title, Lowe investigates “the ways that Europe’s colonial imperative has compelled, through the discourses of liberal economic and political freedom, normative forms of modern subject, society, and state in the colonized world, and how this imperative continues to organize postcolonial Africa, Asia, and the Americas in relation to the telos of modern European form.” It Is Obvious from the Map makes apparent intercontinental, historical and economic intimacies while looking at the map.