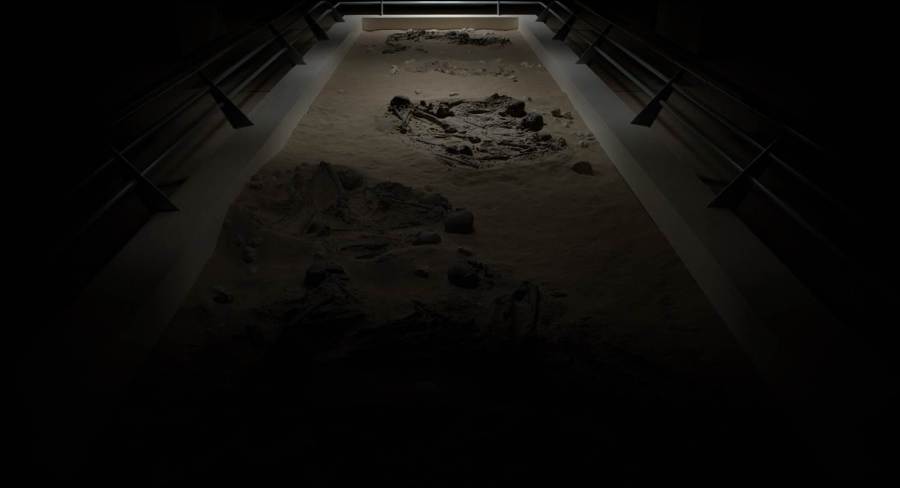 In some measure, all collections are violent and all things are anxious. The act of collecting–of separating something from its context (culture, time, or place) indexes a mastery over another body/thing. Whether the material demonstrates some resilience to time or to being taken (often coded within the language of conservation and preservation), the anxious nature of being hung up to be seen, precariously lodged between two pins, placed in drawer to be studied, stuffed or photographed, cannot possibly be denied, and is never benign. Once resettled in new geographies–museums, archives, on film or on video–these new spaces for artifacts that may have been roughly coterminous, but are now certainly together, endure an ontological effect by which these artifacts exist within new sets of relations that are internal and peculiar to the collection itself.

There is a new messiness of acknowledging the simultaneity of the collection and their affective properties. And this leads to an anxiety, not only on the part of that which is collected and displayed, but on the part of those of us writing, curating, and constructing histories. This anxiety is deeply embedded within, perhaps even constitutive of, the modern project of archaeology. This project is not only based on a chronology, but rather to consider archaeology as emerging from a particular philosophical outlook that creates the foundations for other similar projects of the modern era. In Archaeology and Modernity, Julian Thomas has enumerated some of these projects as “the emergence of nation-states, industrialization, improvements in communications and transport, mercantilism, the control of violence  by the state, surveillance, constant political struggle, an increasingly urban way of life, and an experience of agitation, turbulence, and continuous change.” It is this violence and anxiety that Ali Cherri’s contemporary artistic practice has tapped into. His work serves as a collection of debates contending with the nature of contemporary art and archaeology. 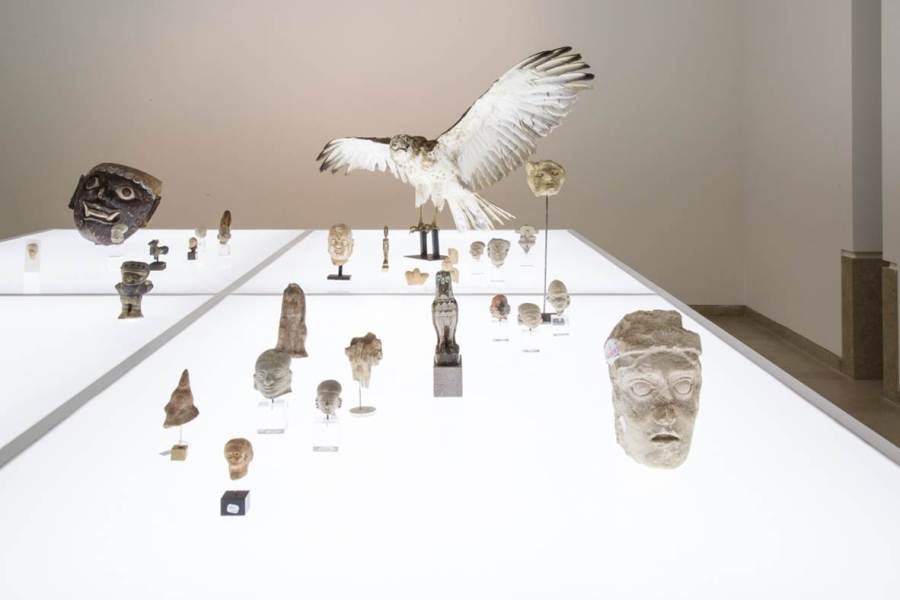 As birds are to Cherri what cats were to Chris Marker, I will begin with a consideration of strigiformes. 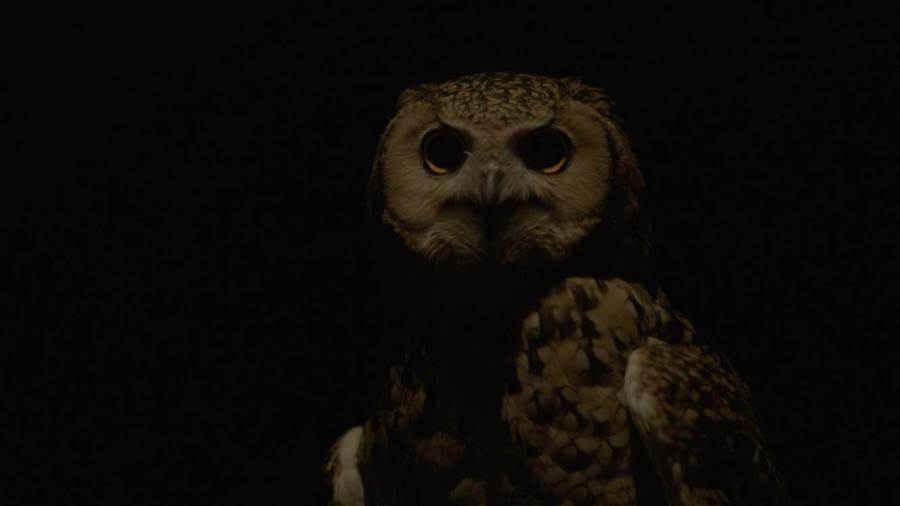 More commonly known as owls, six of the 195 owl species of the world are found in the United Arab Emirates. One of most common of these solitary, nocturnal birds is Athene noctua–or The Owl of Athena, or The Little Owl. In her 2001 book, The Living Goddess, Marija Gimbutas has traced the veneration of the owl as a goddess as predating Indo-European cultures. The owl featured in Petrified (2015), a Bubo ascalaphus, in contrast to Athene noctua, has a smaller geographic range. It is found in the MENA region, and in that sense, we might even consider it local to discourses of contemporary art and archaeology from that region. And true to its local roots, it is called the Pharaoh Eagle-Owl: a local bird that has been classified with its ancient pharaonic regional history. This owl’s gaze pierces through Cherri’s film, capturing the simultaneity of knowledge and destruction, and the sorcery that masks the violence. This gaze excavates for us the modern dream of what archaeology was supposed to be, what it had been constructed for, and the heaviness of that burden–it is in the swiftness and agility that the violence of knowing is so powerful that by a glance and a shrill piercing sound that we come face-to-face with archaeology as indexical of modernity’s failure. We stand petrified in each sense of the word–simultaneously fossilized in our own steps and completely and utterly anxious and horrified of where the promises of modernity have landed us.

The Dream of Archaeology

Modernity’s dream of what archaeology was supposed to be, what it had been constructed for, that is, the utopic vision of progress linked to the science of antiquity, and the heaviness of that burden, is often most acutely realized in headlines read about death and violence as a result of archaeological, historical, and heritage debates (such as that at Ayodhya, India). Archaeology can no longer feign ignorance: as archaeologists we are fully aware of the imbricated and deeply colonial, racist, sexist, and cissexist epistemology of our field. It is also commonly understood among archaeologists that without modernity, archaeology as we know it would not exist. But then again, insofar as modernity may claim history-making through the construction of disciplines such as archaeology, it is also important to recognize that history was written for certain reasons and with deep biases. That history, the deep past, and/or the contemporary, is molded and shaped in the service of the nation. Whether it is there to contest it or promote it, in engaging with the nation, it continues to reiterate its power. Given that the project of modernity is linked to the making of history through archaeology as the making of the nation, it is also just as important to recognize archaeology’s complex and entangled relationship with colonialism, patriarchy, and capitalism. 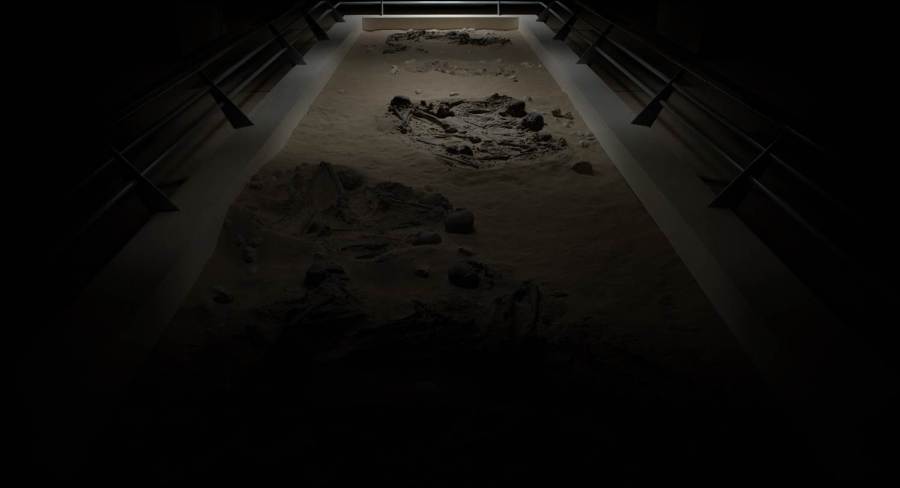 Deep in those entangled relationships, Cherri’s film, The Digger (2015) situates the viewer between the archaeological site of Jebel al-Buhais (Sharjah, UAE), and the collections within the museum. The bodies from the graveyard of al-Buhais-18 are displayed at the museum and in the film. In the film, the bodies are first illuminated, and then darkened. We are left anxious, and uncertain; the film itself is deathly. Cherri imparts both a real feeling to the fictional, and an unreal feeling to the real. But what is fictional in this moment is not what we are seeing or hearing or experiencing: what is fictional is the dream of what archaeology was supposed to be.

Archaeology has, in a contemporary moment, moved beyond the trope of modernity. We are no longer this failed attempt at history-making. We are no longer bound by time. Rather, we are more concerned with the material, with the methodology, and with the ways in which we might resist in this moment, making us contemporary archaeologists who have the capacity to stand out of time to critique, following what Agamben has argued about the contemporary, and collectives like Raqs Media Collective have embraced. There is a capaciousness to the contemporary and something to that faux-freedom of seriousness that it engenders. In some manner, it is as if we have all been placed into an ontologically distinct collection of concerns and are now speaking from similar standpoints.

Ali Cherri’s films in this exhibition captivate the viewer through the moving image and transport their body to a place of stillness in order to become a listener. The mastery of the craft is in the depth of the image that finds its texture and intimacy through sound. His films capture the sound of light and dark; of wind and sand. The biophony erases the nature/culture divide and emerges as a critical voice in a rearticulation of a contemporary project. 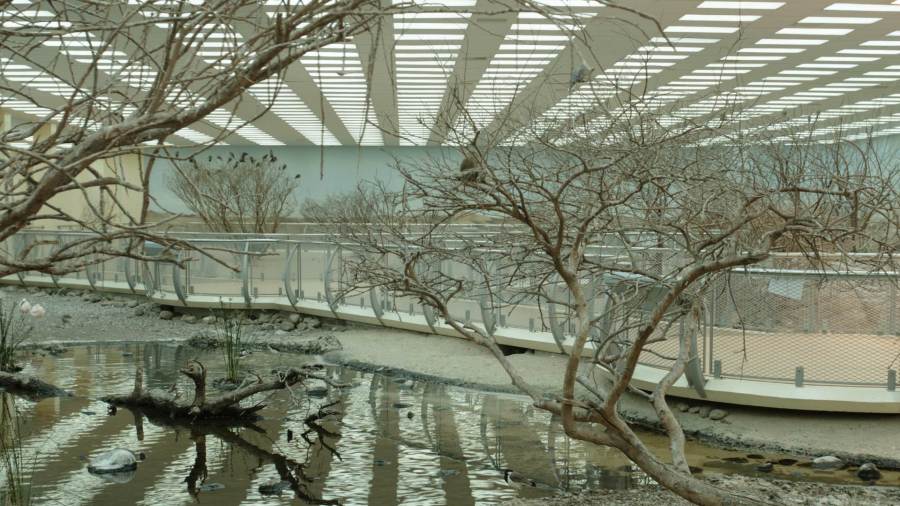 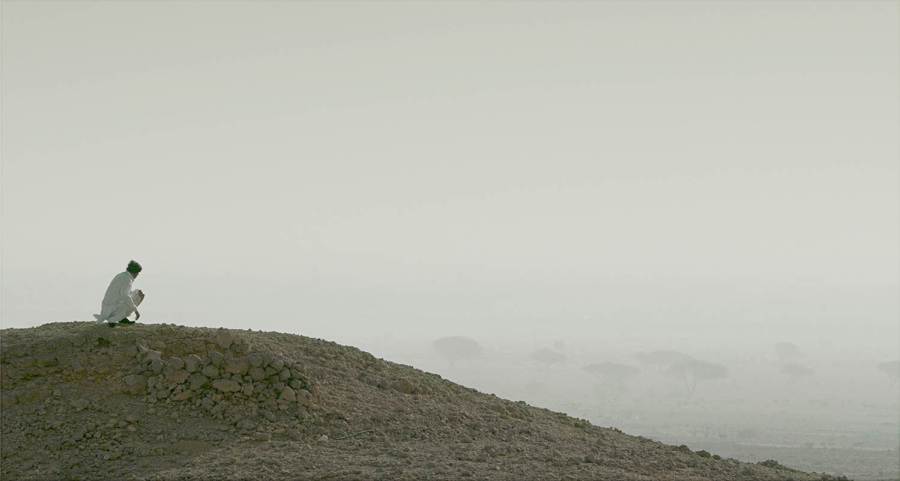 As an archaeologist, I was familiar with the conversations of the wind and sand, particularly the ones of cotton flapping responses to the wind, with grit interjecting. By transforming the viewer into the listener, we are left aware at how little many of us actually listen to hear. The trope of whether or not the subaltern can speak is flipped, and the onus of listening is upon us. Our bodies are implicated, and we are reminded that we must place ourselves within these discourses, politics, and modes of resistance in order to survive. Rather than worry about progress or accumulation–we might concern ourselves with care and transdisciplinary processes that ensure that we assess all lives as being worthy. And the things we live with, worthy of vitality beyond what we ascribe to them.

Ali Cherri’s solo show, A Taxonomy of Fallacies: The Life of Dead Objects, at the Sursock Museum (Beirut) was on view until September 19, 2016.

Uzma Z. Rizvi is Associate Professor of Anthropology and Urban Studies at the Pratt Institute of Art and Design, Brooklyn, where she teaches anthropology, ancient urbanism, critical heritage studies, memory and war/trauma studies, art and social change and the postcolonial critique. Rizvi is currently a Visiting Faculty in the Department of International Studies at the American University of Sharjah, UAE. Rizvi (w/ Amal Khalaf) directed Art Dubai’s 2016 Global Art Forum, The Future Was____. Her work can be read in The New Inquiry and Savage Minds; recent publications include ‘The Taste of Earth’ (2015); ‘Decolonizing Archaeology: On the Global Heritage of Epistemic Laziness,’ (2015); The World Archaeological Congress Research Handbook on Postcolonial Archaeology (2010).